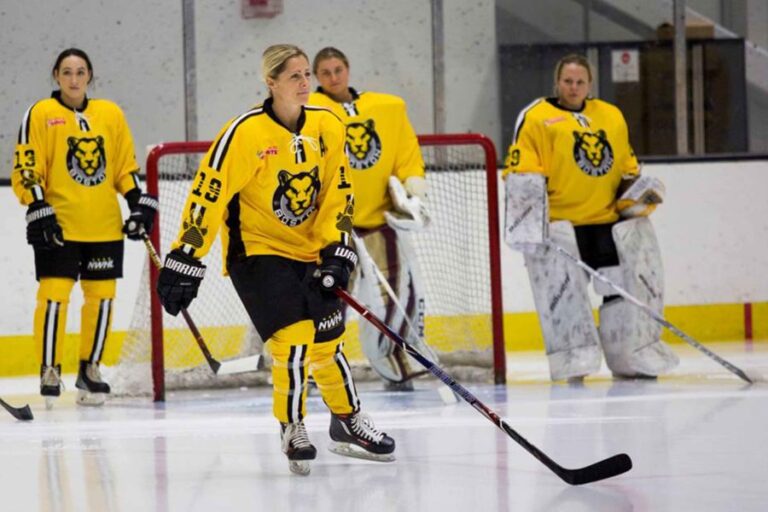 With a dozen professional sports championships since 2001, Greater Boston and New England has some major bragging rights — way to go Patriots 2019 Super Bowl champs! But, locally, pro sports aren’t only about Brady and the boys.

Boston area women’s teams have a heavy emphasis on community involvement to give women and girls access to sports training and to support women’s success in the professional sports industry.

So, here’s how you can get involved in the fight to keep women in the game at all levels by supporting local women’s teams who are all about making “You hit like a girl!” the compliment it deserves to be.

Women have been competing in hockey tournaments in the U.S. since 1916. It’s one of the earliest sports that women had formal access to, but the Great Depression and World Wars I and II halted growth. It wasn’t until the 1970s that the sport took off again, and women’s teams and clubs began to emerge at the university level. In 1998 women’s hockey became a medal sport for the first time in the Olympics — notably, the U.S. beat Canada 3-1 for the gold. Still, the National Women’s Hockey League (NWHL U.S.) wasn’t established until 2015.

One of those NWHL teams is the Boston Pride, and proud doesn’t begin to describe it. Earlier this month, the Boston Bruins announced an official partnership with the ladies’ team and a commitment to fostering women in hockey. The biggest coup of this agreement is the formation of the Bruins Academy ‘Girls Learn to Play’ Program, which offers discounted equipment to participants and on-ice training from pro players.

Aside from a short-lived, but passionate, mania for women’s football in the 1930s, it wasn’t really until the 1970s that women broke into the sport on a national level. In 1974 the National Women’s Football League was established; it existed under several names until 2008.* In 2009, the Women’s Football Alliance (WFA) launched, revolutionizing the way the sport was paid for, with a nonprofit business model (75 percent of proceeds went back into fostering the team and players, a model that allowed the organization, and sport, to blossom nationally).

When it comes to football, Boston doesn’t mess around. Boston Renegades are the reigning WFA National Champion. In fact, they’re a four-time national championship team, which is especially impressive considering the league has only been operating for 10 years. The team is equally serious about giving back. This past fall, it conducted three football skills development camps for female athletes. These sessions double as scouting for the 2019 season, opening up big opportunities for local female athletes, no experience required.

On the national stage, the United Women’s Lacrosse Association was established in 1931 and teams played continuously until women’s lacrosse took off in the 1970s. The International Federation of Women’s Lacrosse Associations, which was later incorporated into the Federation of International Lacrosse (FIL), held its first world championship in 1982. Since then, the U.S. women’s team has won eight out of 10 World Cups and finished as the runner up in the other two. Here in Boston, Digit Murphy and Ardona Kirby of the Play It Forward Sports Foundation founded the United Women’s Lacrosse League (UWLX) in 2016.

The professional league features teams in four major sports markets including Boston. Last year,  the Boston Storm team made it to the franchise’s first UWLX championship. This season the league is switching things up by moving into a new, box-field hybrid format and experimenting with Olympic-style rules. A big part of the UWLX and Boston Storm mission is giving back to the community and supporting college and high-school aged players. This includes clinics and workshops with local players and rookie opportunities for college players to get time on field during UWLX games.

Celina Colby, a freelance writer living in Boston, is a regular contributor to Exhale. When she’s not searching for the perfect empanada, reviewing an art exhibit, or finding hidden gems of Boston, she’s exploring new territories for her travel writing.