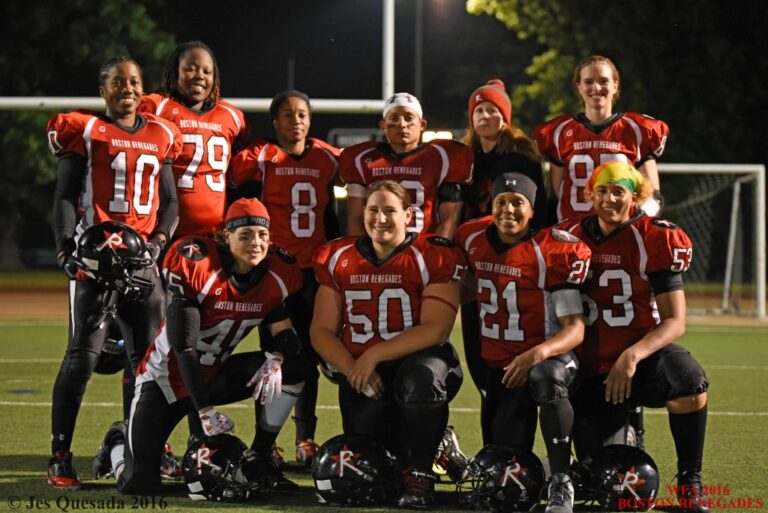 BOSTON – Ten players from the Boston Renegades have been recognized as All-Americans by the Women’s Football Alliance (WFA). WFA Director of Operations Lisa King announced the complete All-American team rosters for the league’s two conferences on June 1 in Visalia, Calif.

Allison Cahill, Quarterback, WFA First Team All-AmericanCahill passed for 1,742 yards (2nd in league) and 27 touchdowns (2nd), while also posting an impressive 67.6% completion rate (2nd) and a 125.8 rating (3rd). She solidified her status as one of the game’s all-time greats when she became women’s football’s first quarterback to reach 100 career victories. This is her ninth consecutive all-star selection.

Vicky Eddy, Linebacker, WFA First Team All-AmericanA two-time gold medalist for Team USA, this is the sixth All-American selection for the seasoned veteran who has helped pave the way for women’s football in Boston over the last 16 years. She leads the team in tackles (41) and has collected a team-leading 4 turnovers on the season so far.

Over her 12-year career, Alpert has been the foundation upon which Boston’s best offensive lines have been built. This is her seventh consecutive All-American selection.

Also a two-time gold medalist for Team USA, Smith proves her mettle by leading the league currently in receiving yards (737), receptions (52), and touchdown receptions (12). A threat to score from anywhere on the field, this is Smith’s seventh All-American selection.

Earning her fifth All-American selection in six seasons, it may be Bonds’ versatility that makes her so valuable to the Renegades. She plays safety, cornerback, and linebacker on defense, receiver, halfback, and quarterback on offense, in addition to returning kicks.

Over six seasons, Woodfine has helped anchor Boston’s offensive line from both the left and right tackle positions. She also excels at springing running backs with her blocking expertise. This is Woodfine’s third All-American selection.

All over the field in her fifth season, Torres has collected a fumble, an interception, a sack, 14 tackles (2 for a loss), and 4 pass deflections. Her abilities as a “shutdown corner” were on display in Week 7 when she limited one of the sport’s best receivers to a mere 43 yards and 0 touchdowns. This is her first All-American selection.

Beinecke is having a breakout season in her second year. Currently ranked second in the league in receptions (43), fifth in touchdown receptions (9), and sixth in receiving yards (534), Beinecke has established herself as a key contributor to the Renegades’ potent air attack. This is her first All-American selection.

In her rookie season, Pula has emerged as a disruptive force for opposing offenses. Her steady play making ability has earned her her first WFA All-American honor.

Asantè is currently the team leader in rushing touchdowns. As though in testimony to her hard work and dedication, Asantè has tallied an impressive three All-American selections in her four seasons, despite sharing rushing duties with Whitney Zelee and Stacey Tiamfook.

The title All-American is used by the WFA to represent the best players at all positions from all teams in the league. The selections are determined by statistical criteria and a poll of head coaches from the league’s 43 teams.

The league’s postseason will begin on Saturday June 11, and the Boston Renegades will host a playoff game at Dilboy Stadium in Somerville at 7 pm.