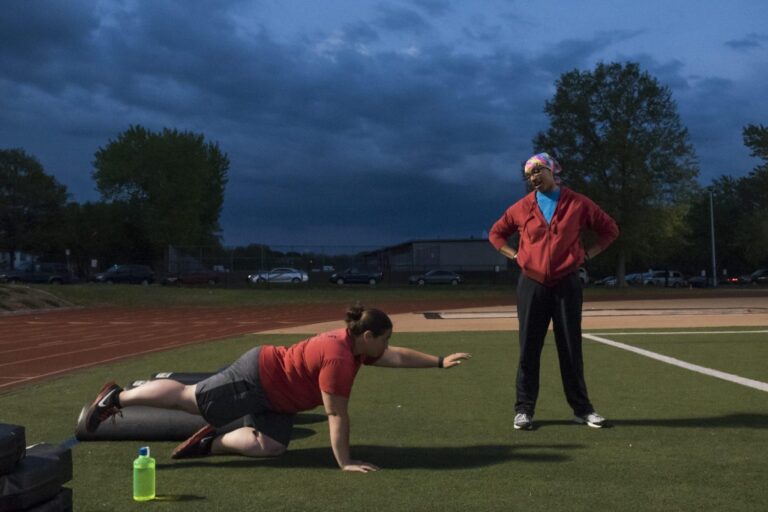 By Sam Goresh, Wicked Local staff. Boston Renegades Amanda Alpert (left) does core exercises to help her lower back as she talks to Torrance Brown (left), who is resting a hamstring injury on the sidelines during a practice at Dilboy Stadium on May 12, 2015. (Wicked Local Staff Photo/ Sam Goresh).

June 12, 2015 — They are at Dilboy Stadium every Tuesday and Thursday night from 7 to 10 p.m. Mothers, students, lawyers, teachers, business owners, all take the field to throw and catch, to hit and get hit, to do it over and over again as the members of the Boston Renegades practice for their next game.

And every night, some watch from the sidelines, waiting for their wounds to heal so they can play ball. Gumby Nesbitt, who has been playing for eight years, thinks that boys and men who have had the choice to play football their whole lives might have less intensity for the sport, but that’s not an option for her and her teammates.

“We do a lot of sacrifices,” Nesbitt said. “The opportunity for us to play is now, here, but we have to pay for it.”

It’s been a challenging season for the Boston Renegades, the full-contact, professional women’s football team based out of Somerville. Players and alumni had to scramble to create a team from almost scratch when owner Ernie Boch Jr. announced he was disbanding the Boston Militia, the former women’s football team in the area, in January. And while they’ve had success during the season, it has come at the price Nesbitt mentioned.

The Renegades won their first game against the Central Maryland Seahawks in a blowout 57-0, but they lost to one of their chief rivals the DC Divas after leading for the first half 32-27, and running backs Sue Quimby and Whitney Zelee tore their anterior cruciate ligaments (ACL) in their knees in those first two games. The team saw other injuries as the season progressed, and will be down several players as they travel to DC to face the DC Divas one more time in the regular season this Saturday, June 13.

Some of the players on the sidelines have dealt with injuries requiring surgery like Zelee and Quimby. Some have broken bones. Others are taking the day off from practice under doctor’s orders so that they will be healthy and strong enough to play in the game. But, on the field or the sidelines the Renegades are there, supporting their team in every way that they can.

Women are more likely to tear their ACL than men are, though medical studies are still exploring the reasons. Some point to physical differences in biomechanics, or even conditioning. The injury is a familiar one for the Renegades. Players Asia Asante and Betsy Calkins both had ACL surgery at the end of last season and are still recovering. The injuries can happen any time in the season.

Chiropractic Sports Physician Dr. Abbie Zubiel serves as the team chiropractor of the Boston Renegades, as well as the Boston Cannons men’s major league lacrosse team. Zubiel frequently uses myofascial release, a therapy based in massaging torn muscle tissue for her patients, and does not see much of a difference between the male and female athletes that she treats. However, because many of the Renegades work full-time desk jobs she helps them deal with the muscular imbalancces that come with sitting at a desk all day.

And with this season in particular, she’s seeing a lot of her patients pushing to get back to their team as soon as possible.

“A lot of players have been going through some rough injuries so they are really motivated to get back on the field with aggressive treatment,” Zubiel said.

Zelee says that it helps her feel optimistic about her prognosis after watching her teammates recover from the surgery. When asked why she looks forward to coming back after her injury, “I just love it I love the competition… It motivates me, coming back from these injuries. Just come back stronger.”

Chief Operating Officer and player Mia Brickhouse said playing hurt and injured is part of the nature of the sport, some injuries can end a season or a career but for the most part players are week to week.

“The reality of it is that football’s a sport where no one is healthy, we don’t make a lot of excuses, everyone’s expected to play through pain,” she said. “If you’re not playing through pain, you’re not giving it your all.”

Aching through the years

Linebacker coach Molly Goodman, remembers of her nine years playing that even her fingers would be sore.

“I’d have to ask for help opening jars!”

Nesbitt, who travels from Buffalo, New York to play with the Renegades, has been playing for eight years. She believes there is a special drive for women who are playing football. She and her teammates will schedule surgeries for their injuries around their season so that they will heal in time to play again.

Although sometimes, players don’t wait. She recalls the time she was playing with a dislocated collarbone, “I couldn’t lift my arms over my head, but you don’t need to lift your arms in football!” After being hit during a play, she realized her opponent had popped her collarbone back in place, and thanked the confused tight end for the hit.

Brooke Goodman, a rookie with the team, is no stranger to exertion and injury. She has participated in sports from soccer to marathon running. But the physical demands of football are a different matter.

“It is nothing like any sport I’ve ever played,” Goodman said. “Everything hurts, I’m covered in bruises all the time, aches, pains … every practice I feel like I was in a boxing match.”

But the tough physical and mental challenges of football lead to great rewards. Goodman said there are moments, where she gets knocked down by a player larger then her and she wonders why she is doing this, “but then you make a play around them the next time… And it feels great.”

What picks people back up is not just love of the sport, defensive end and nose tackle Torrance Brown said, but also love of the team. “These are your sisters, and you do for them, you sacrifice for them.”

(Click here to read a PDF of this article as it appeared in the Somerville Journal.)