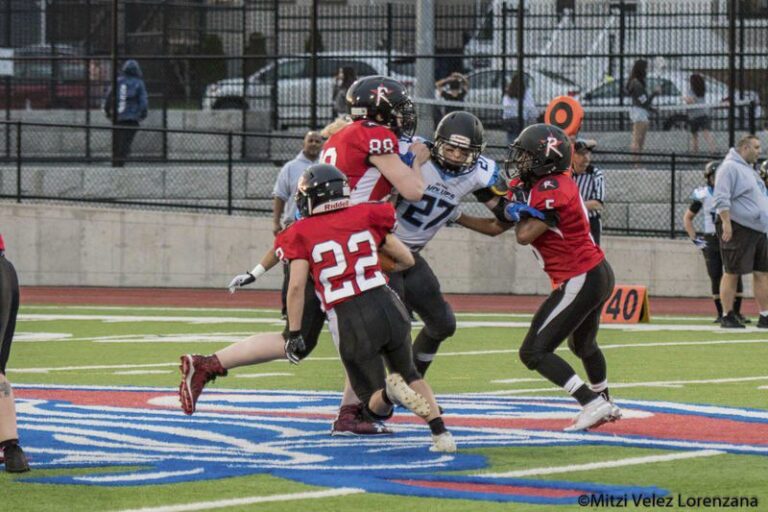 By Austin Woolman | The Salem News

Molly Goodwin — owner of the women’s football squad Boston Renegades — has loved the sport dating back to her childhood in Denver, Colorado. She religiously watched the Broncos with her family every Sunday, was a devoted fan of the NCAA Nebraska Cornhuskers and grew up playing in her local tackle-football league.

However, that came to an end at 12 years old when she wasn’t allowed to play Pop Warner.

“My family and I tried to register as M. Goodwin so people wouldn’t know I was a girl,” said Goodwin. “I remember the league commissioner coming to our family and saying he’d let me play, but that it would cause a lot of problems including the coaches threatening to quit.”

Despite the devastation, Goodwin turned this misogynistic ruling into a fire that’s continued to fuel her lifelong passion for football. The end result? A championship franchise that is just as successful as any other Beantown team.

The Boston Renegades (9-0) will play the Cali War (8-0) in the Women’s Football Alliance National Championship at Colorado School of Mines Saturday evening. Based in Revere, the Renegades are seeking back-to-back titles after besting the War (formerly the Los Angeles Warriors) in last season’s championship tilt 42-18.

“I’m thankful I have all the responsibilities of being an owner and making sure everything is on schedule,” said Goodwin who is also a former WFA linebacker for the Boston Militia. “It helps keep my nerves distracted and not think too much about the game — it’s all I’d be thinking about otherwise.”

One of Boston’s most reliable players is Salem resident and starting offensive lineman Erin Truex. She and the offensive line unit were a key factor in 2019 First Team All-American running back Ruth Matta scampering for four touchdowns in the Renegades’ 66-20 victory over the D.C. Divas in the conference title clash.

“She’s an incredible athlete; her quickness is what really makes her special,” said the 6-foot-2, 200-plus pound lineman. “We all love blocking for her because she uses the gaps we make almost every time, and if she isn’t it’s because she’s bouncing outside before we can even tell.”

According to Truex, Ruth Matta’s addition is part of a larger factor helping the Renegades excel this season. Matta played for the UK Birmingham Lions last year and was one of the many women entering their first season with the squad including wide receiver J.J. Seiles and former Philadelphia Phantomz star safety Shantia Creech.

“It’s not just their talent that’s helped us,” said Truex, who is also the Director of Development at LEAP for Education. “It’s their dedication to what we are trying to accomplish together. These women are coming from all over the world just for the opportunity to play football and that’s really special. They take it just as seriously as we all do and that’s how we’ve been able to have consistent success … everyone here puts everything they can into this program despite having families on top of careers off of the field.”

Having a one-year old daughter, a full-time job and being an active board member of the North Shore’s Healing Abuse Working for Change hasn’t stopped Truex from playing pigskin for Boston since 2016. Even with an overwhelming schedule she views football as a means to escape life’s pressures and let everything out.

“I don’t view playing as work … but it’s something that I need to put the work into,” said the Salem resident. “And that’s the attitude we have that I think sets us apart from all the other team’s in the league. There’s a cohesive atmosphere from top to bottom that feels like a breeding ground for success and I think we’ve proven that to be right.”

Truex couldn’t help but rave specifically of quarterback Allison Cahill and former Peabody track standout turned cornerback Briannah Gallo. She stated that their leadership is what’s helped set the high standards for the Renegades as they’re set to play in their third straight national championship.

“Allison’s been all over the league and has multiple championships,” Truex said of the quarterback who’s been playing since 2003. “There’s no one who works harder or is a better leader than her. She’s quiet but leads strongly by example.”

“Briannah is someone who’s been in the league for a long time,” Truex added of the former First-Team All-American defensive back. “She’s one of the many longtime veterans we respect and has a strong locker room presence that’s been important for us during the year. (Gallo) is also really intelligent and has great anticipation.”

Of course, Truex admitted she had a hard time thinking of anyone more inspiring than Goodwin who was also a former player for the Boston Militia. The Renegades owner’s origin story is well documented around the women’s football circles and the WFA couldn’t imagine playing for a better owner.

“She’s someone who’s looked at very highly across the league,” Truex said of the Brighton resident. “I’ve learned so much from just talking to her and picking her brain about things. She’s really knowledgeable and does a tremendous job of balancing her career outside of the sport while running the organization at a high level.”

The WFA National Championship game will be broadcast on ESPN3 Saturday evening from the Orediggers’ home stadium in Golden, Colorado. In a league of 60 teams spread across three divisions, only the War and Renegades remain and Truex is looking forward to the challenge.

“They have a tremendous defensive line so we are going to have our work cut out for us,” she said. “Every time we step on the field we as an (offensive line) unit feel we need to be the best on the field … but Saturday that will particularly be the case. It’s going to be a fun day.”