EVANSTON, Illinois. — In windy, unseasonably frigid, and mostly rainy weather conditions, the Boston Renegades mounted a dramatic and epic comeback, tying the game with under a minute left in the fourth quarter and then scoring a touchdown in overtime to stun the favored Chicago Force on their home turf at Lazier Field in Evanston, Illinois.

After defeating the Cleveland Fusion by only a narrow four-point margin two weeks earlier, Boston was looking to make a statement against the favored Chicago Force. At the start of the game, victory seemed entirely possible when the Renegades quickly posted a 16-0 advantage in the first quarter. Chicago had won the coin toss but deferred, and Boston’s offense, with chunks of yardage gained by running backs Asia Asantè #8 and Stacey Tiamfook #28, promptly moved down the field. Quarterback Allison Cahill #7 delivered an eight-yard strike to wide receiver Adrienne Smith #10 for the touchdown, and a successful PAT by Brooke Goodman #97 gave the Renegades a 7-0 lead.

After three-and-outs by each team, Boston had gained excellent defensive field position and forced Chicago to attempt a punt from deep in their end zone. Former Chicago Force linebacker Jen Dulski #76 blocked the punt back out of bounds scoring a safety, and the Renegades lead 9-0.

Boston returned the ensuing kickoff to Chicago’s 33 yard line and again made quick work of moving into scoring position. Cahill completed a deep 22-yard pass to tight end Emily Weinberg #85 for a key third-down conversion. Asantè punched into the end zone three plays later, and another successful PAT gave the Renegades a 16-0 lead with 4:06 remaining in the first quarter.

But that’s when Boston’s dominance on offense came to a halt.

“[Chicago] made defensive adjustments quickly,” said Cahill. “And besides that, I think they kinda woke up, started being more aggressive, and started being much more who we are used to them being.”

The Renegades were then held scoreless from the end of the first quarter until the last minute of the fourth, while Chicago churned out 24 unanswered points, taking an eight-point lead deep into the contest.

This began with Chicago’s next series, when their offense sprung to life with a 76-yard touchdown sprint by Force running back Cassey Brick. The speedster Brick, formerly of the San Diego Surge and other California-based teams, was the MVP of the 2012 WFA National Championship when the Surge defeated the Chicago Force 40-36.

In an attempt to shave the Renegades’ lead to a single score, Chicago attempted a two-point conversion but failed, leaving the score 16-6 in Boston’s favor with 3:43 remaining in the first quarter. (The failed point-after attempt would prove habitual and costly; by game’s end, Chicago had failed in four attempts at two-point conversions when, as it turned out, any one successful PAT would have given them a victory.)

For the remainder of the first half, the two defensive units made their marks, keeping opposing offenses out of the end zone. Chicago eventually managed a trip downfield with the clock winding down to halftime, but despite taking 11 snaps in the red zone, Chicago’s vaunted offense was unable to elude Boston’s relentless tacklers. A goal-line stand by the Renegades turned away the Force and the score remained 16-6 with Boston in the lead at halftime.

Until this matchup with Boston, the Force had averaged 67 points per game in the 2015 season.

“To hold a high-powered offense like Chicago’s to 6 points in the first half and 12 defensive points in the second half is a testament to how well our defense played,” said Renegades Head Coach Don Williams.

Coming out of halftime, the miserable weather conditions — rainy, with a wind chill near freezing — had not improved. Regardless, the Chicago Force started the third quarter with a methodical 12-play drive capped by a 9-yard touchdown rush by Rachel Gore, who previously established herself as one of the league’s top quarterbacks with the Seattle Majestics. Gore and Jamie Fornal, one of the league’s top defenders, both left the Seattle club in the offseason to join the Force for 2015.

Boston’s defense continued to make its presence felt, however, by mounting yet another goal-line stand to deny Chicago’s two-point conversion attempt, and the score was 16-12 at 8:35 in the third quarter.

It was then the Force’s turn to gain the upper hand in the battle for field position by pinning the Renegades on their own 5 yard line on the following kickoff. Tiamfook rushed twice for first downs, giving the offense some breathing room. But just when it seemed the Renegades’ rushing attack was gaining momentum, Chicago recovered a fumbled handoff and scored a touchdown two plays later on a 24-yard keeper by Gore. Despite a gimmicky offensive formation from Chicago, the Boston defense once again denied their two-point attempt. Still, the Force had jumped ahead of the Renegades 18-16.

That score would hold into the fourth quarter. The teams battled back and forth with neither able to gain much traction, until the Force’s Brick returned a punt 89 yards for a touchdown. But once again, Boston’s defense foiled the Force’s two-point attempt, critically keeping Chicago’s lead to 8 points and leaving the score 24-16 with 8:14 remaining in the fourth quarter.

On the Renegades’ next possession, Chicago’s defense clamped down, sacking Cahill and forcing a three-and-out. After returning the punt to the Renegades’ 30 yard line, the Force had an excellent chance with 6:54 remaining to put the game out of reach.

“Our players didn’t flinch, they didn’t get flustered, they didn’t lay blame on each other,” said Coach Williams. “They knew that if we believed in each other and what we were doing, and could get the ball back one more time, we could tie the game.”

Chicago deployed their ground assault to burn time off the clock. They eventually drove as far as the 11 yard line when Boston caught a break as an offsides penalty stopped the clock and pushed the Force five yards back. One play later, Chicago faced a 4th down with 5 yards to go at the 14, but rather than attempt a field goal into the wind, the Force elected to try for a first down. Boston’s defense rose to the occasion once again when linewoman Torrance Brown #74 knocked down an errant pass attempt by Gore resulting in a turnover on downs.

With only three minutes remaining in the game, after holding Boston scoreless for nearly 46 minutes, Chicago had an eight point lead.

“It seemed like they had figured out everything they needed to do to stop us,” said Cahill. “But I watched our defense keep fighting like it was the first drive of the day. And they stopped them. It really boosted me up.”

The following offensive drive from the Renegades would be nothing short of epic.

Sprung by a big block by Adrienne Smith, Tiamfook started the drive with a 13-yard rumble to the 27. Tiamfook followed with rushes of three and six yards. Boston then reset the downs with a 4-yard completion to wide receiver Kathryn Tylander #15 at the 39 yard line with 1:22 remaining. After an ineligible-receiver penalty on the next play wiped out a much-needed 20-yard gain, the following play resulted in an incompletion and the Renegades faced a long third down. With thirty-six seconds remaining, Cahill lofted a pass over the middle to Weinberg for 20 yards and a crucial first down at Chicago’s 41 yard line. Two incompletions followed and the Renegades again faced a long third down, behind by eight points with 19 seconds remaining in the game.

As the series played out, the wind and rain that had been incessant throughout the game began to dissipate.

“These were the worst weather conditions we’ve ever played in,” said Cahill. “Suddenly the wind died, the rain stopped, and when I got that ball in my hands and it felt dry, I said to myself ‘Okay, I can work with this’ and I threw it as hard as I could.”

Cahill fired a deep 41-yard pass to wide receiver Chanté Bonds #21, who sprinted past two defenders to the end zone. Tiamfook scored the two-point conversion on the carry to tie the game at 24-24 with only 11 seconds remaining in regulation.

Chicago quickly ran out of time on the next possession and the game went to overtime, a highly uncommon occurrence for either team. This would be Chicago’s first overtime game since the 2008 Independent Women’s Football League (IWFL) World Championship game, when they fell to the Dallas Diamonds 35-29. And no Boston-area team had played an overtime game since 2006, when the Mass Mutiny of the now-defunct National Women’s Football Association (NWFA) lost 7-6 to the Connecticut Crush. 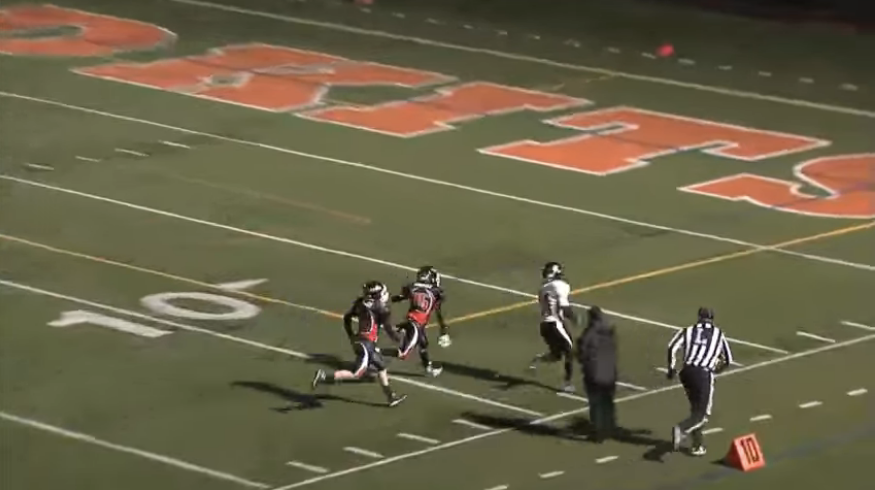 Before overtime play commenced, the coin toss was won by Chicago who opted to play defense first. A penalty, a tackle in the backfield, and two incompletions had the Renegades needing 19 yards on fourth down. Again, it was Weinberg who came through with a first down on a strong 22-yard pass from Cahill. On the next play, Tiamfook, following blocks by Tylander and offensive tackles Jessica Cabrera and Steff Jeffers, weaved her way into the end zone from 12 yards out. The snap on the extra point was mishandled and resulted in a score of 30-24.

Then it was Chicago’s chance to possess the ball, but the Renegades’ swarming tacklers, lead by Jessica Penta (9 tackles, 1 TFL), stopped the Force cold to claim the overtime victory.

“I can’t rave enough about how well the defense stepped up against a great team,” said Coach Williams.

“A game like this is one of those moments that changes your outlook, changes what you think about each other, and what you think you can accomplish moving forward,” said Cahill in a post-game interview. “It gives us a huge amount of confidence. I can sense a little something changing in the air.”