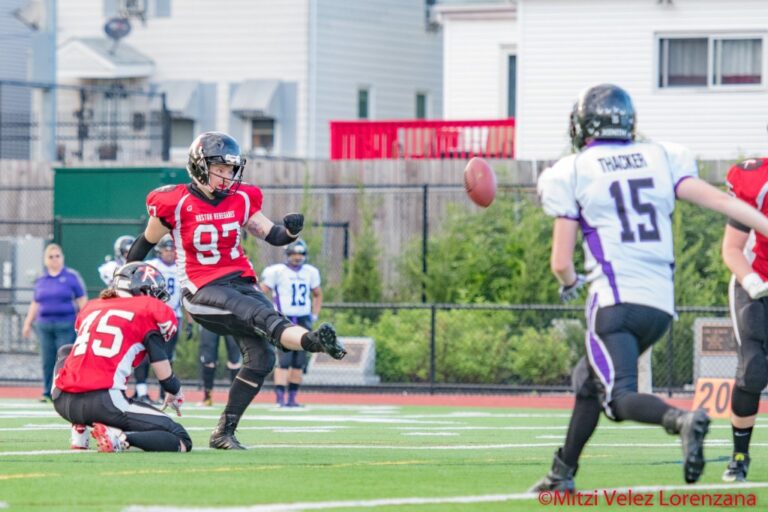 Erin Truex | Special to WFAprofootball.com
PITTSBURGH — June 29, 2018 — The Boston Renegades begin the 2018 postseason on the road for a quarterfinal matchup against the Pittsburgh Passion on Saturday, June 30th. Entering the playoffs with a record of 6-2, the Renegades look to rectify a 41-44 result against Pittsburgh earlier this season.

On their April 21 trip to Pittsburgh, the Renegades rallied from behind with a 20-point scoring surge in the 4th quarter, but were unable to overcome an early deficit. The game was the first time a team had scored more than 40 points against the Renegades since 2016.

This Saturday, the Renegades hope to bring some of their home field magic, where they have outscored opponents 119-14. In the final two games of the regular season, the Renegades held their opponents scoreless with 42-0 and 56-0 wins over the Baltimore Nighthawks and Philadelphia Phantomz, respectively.

Brooke Goodman (#97), defensive end and kicker now in her 4th season, notes that adjustments by defense will be crucial to a different outcome in this month’s game.

“The biggest difference in our defense between our last Pittsburgh game and coming into this playoff game is confidence in ourselves and trust in each other,” Goodman said. “We’ve put in the time on the field to improve our skills and off the field in studying hours of game film. I know it will be a battle, the Passion are a great team, but I am extremely confident in our team and whole-heartedly believe we will come out on top.”

Fans should be on the lookout for potential changes in approach to scoring by both teams.

In their April match-up, Pittsburgh doubled Boston’s rushing yards 148 to 71, while the Renegades outmatched Pittsburgh’s passing yards 342 to 180. Much of Boston’s passing success has been led by veterans, quarterback Allison Cahill (#7) and wide receiver Emily Beinecke (#87). Now in their 15th and 4th seasons, respectively, Cahill and Beinecke have connected for over 330 yards and four touchdowns in their last three meetings with Pittsburgh.

A successful passing game has benefited from a strong offensive line, which is anchored by center Ash Beckham (#80), who recognizes the importance of their role.

“The five people up front have a direct relation to the team’s success,” she said. “We are crucial to every play.”

On both sides of the ball, the Renegades will look to capitalize on the knowledge from veterans to lead a team that has changed with new recruits.

“We have a lot of young players and some veterans in new roles, so it took some time to develop the chemistry needed to be successful as a unit,” says the veteran Goodman.

Although only in her third season, Beckham made it clear that the rookies are not a hindrance to her focus or success.

“I still feel new to this sport,” Beckham said. “But I have my routine and I’m prepared mentally when it’s game time. Being on the road isn’t a detriment to us.”