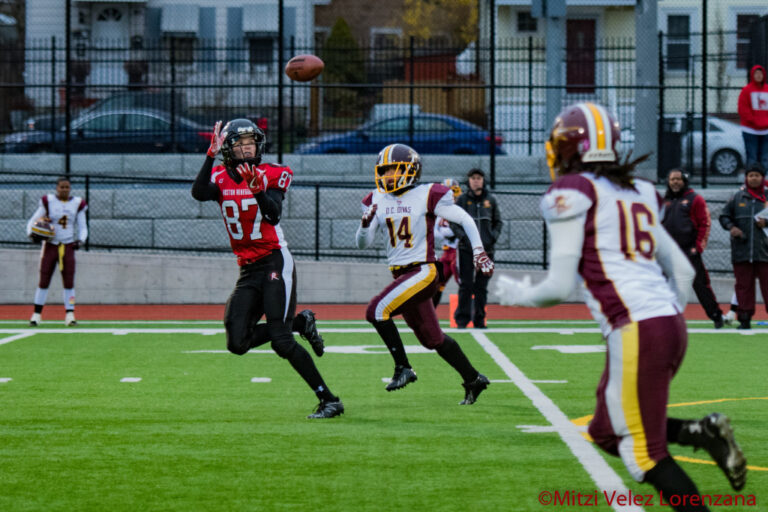 BOSTON — Allison Cahill #7 and Emily Beinecke #87 connected through the air 11 times for 187 yards and two touchdowns to help the Renegades top the D.C. Divas, 21-14. Running back Angelica Pascual #1 led Boston’s rushing attack with 82 yards and a score. The Renegades overcame an early 14-point deficit to emerge victorious.

The game couldn’t have started better for the D.C. Divas. Despite the wind and cold temperatures, Boston’s foes came out of the gate burning hot, scoring on a 31-yard pass on their first possession, then stopping the Renegades first drive in the red zone. D.C. then capped an 89-yard drive with a 50-yard touchdown pass to take an early 14-0 lead only two minutes into the second quarter. Not to be outdone at the airshow, the Renegades then responded with a 60-yard strike from Cahill to Beinecke to make the score 14-6.

Boston’s defense began to buckle down on the Divas’ next drive, forcing a field goal attempt which fell short. And despite two an interception and a fumble lost by quarterback Cahill, D.C. could muster only two punts before the end of the half against Boston’s rising defense.

The Renegades defense would continue freeze out the Divas through the second half, holding the previously potent Divas offense to only two punts and a turnover on downs. Veteran linebacker Mia Brickhouse #18 collected three tackles in the second half while newcomers Danielle Fournier #70, Danielle Harrison #92, and Penny Fagnani #62 contributed 2 tackles, knocked down a pass, and landed a sack, respectively.

The strong play of the defense opened the door for Boston’s offense to tie the game. While their first drive of the third quarter stalled inside the red zone, they capitalized on a 35-yard completion to Beinecke with a scoring rush by Angelica Pascual #1. Cahill scrambled into the end zone on the conversion attempt to knot the game at 14 points apiece.

Boston’s special teams unit then made its presence felt when Marcia Beatty #14 recovered an onside kick to retain possession for the Renegades. Beinecke’s second receiving touchdown and an extra point by Brooke Goodman #97 put the Renegades ahead 21-14. Though D.C. got as far as the 15-yard-line on their final possession of the game, the defense preserved the victory for Boston.

When asked about the play of his team so far this season, Renegades Head Coach John Johnson said “a number of our best players — on both sides of the ball, actually — have been unable to get on the field, so we’ve been playing with a lot of new pieces.” Against D.C., the Renegades offense was missing wide receivers Adrienne Smith #10, Kathryn Tylander #15, and Lauren Yung #8, running backs Whitney Zelee #33 and Stacey Tiamfook #28, and guard Erin Truex #88, while linebacker Vicky Eddy #45, and linewomen Laura Pula #72 and Lakia Carter #71, were absent from the defense. “It’s a lot of adjustments to make,” explained Coach Johnson. “Newer players are being given opportunities, and we have moved some folks from [offense] to [defense] and vice versa just to make it work.”

With the victory, offensive liner Amanda Alpert #50 reached a milestone of 100 victories earned on the gridiron. Originally a member of the 2005 Bay State Warriors of the Independent Women’s Football League, Alpert is one of the greatest centers in women’s football history, collecting seven all-star selections and three championship rings so far. She joins Vicky Eddy, Amy Saur, Jennifer Olivieri, Shana Segers, Allison Cahill, Jessica Cabrera and Charlene Casey as a member of Boston Women’s Football’s “100 Club”.

The Renegades will face the Divas again in D.C. on May 19. Boston (2-0) next faces the Pittsburgh Passion on Saturday, April 21 in Pittsburgh. The team’s next home game will be June 2 against the Baltimore Nighthawks.