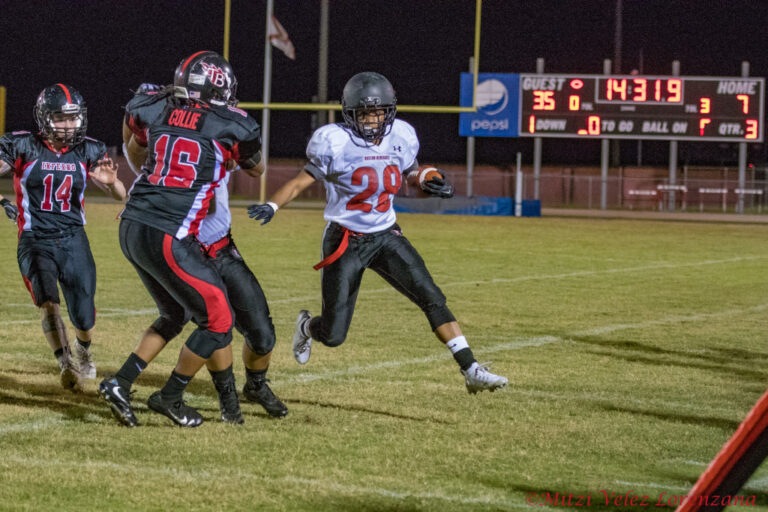 Renegades off to hot start against Inferno

This was the first meeting between the franchises. Established in 2010, the Inferno has compiled a 53-19 regular season record, going undefeated twice with only one season under .500. They earned five playoff berths, making two bowl game appearances.

Boston received the kickoff to start the game and they immediately set the pace with a quick tempo on offense. Cahill completed her first three passes before Pascual opened the scoring with a 39-yard scamper to the end zone. Although the extra point attempt was missed, the Renegades got the point back on their next drive. Following a touchdown reception by tight end Kathryn Tylander #15, Cahill converted a two-point conversion with a pass to wide receiver Stephanie Pascual #3. Halfway through the first quarter, Boston had jumped out to a 14-point lead.

Tampa Bay then mounted a scoring drive. Aided by penalties and a 15-yard rush by running back Marcelina Chavez #7, the Inferno put themselves into Boston’s red zone. Though a sack by linebacker Deanna Walsh #53 forced Tampa Bay into a 3rd-and-long situation at the 19-yard line, Inferno quarterback Kim Shaw #2 connected with wide receiver Candace Pistole #8 who juked her way into the end zone. Pistole then kicked an extra point to narrow Boston’s lead 14-7, and that is how the first quarter ended.

Undeterred, the Renegades scored another touchdown early in the second quarter to cap a seven-play drive. Newcomer Ruth Matta #22, who has been one of Europe’s top running backs in recent years as a member of the Birmingham Lions Women, scored her first touchdown as a Renegade, crossing the stripe from one yard out. She finished the game with 42 yards on 4 carries while scoring two touchdowns. She also chipped in one reception for 13 yards. The game also marked the American debut of J.J. Seiles #81, a wide receiver from the Helsinki Roosters (Finland), who made a reception of 6 yards.

Boston’s defense then clamped down, with rookie linebacker Shannon Singletary #42 making her first career interception. The Renegades’ dominance on defense continued for the rest of the game, as they collected three turnovers, five sacks, and five pass deflections. Tampa Bay did not score again.

And to put an exclamation point on the Renegades’ defensive performance, cornerback Shantia Creech #28 — also a newcomer from Philadelphia — made the longest play of the night by returning an interception 58 yards for a touchdown.

The Renegades will take on the New York Wolves next Saturday, April 13, for their home opener at Della Russo Stadium in Revere.

Also read:
A Debut of Champions – Interview with Ruth Matta
Out-of-the-ordinary start to season for the Renegades