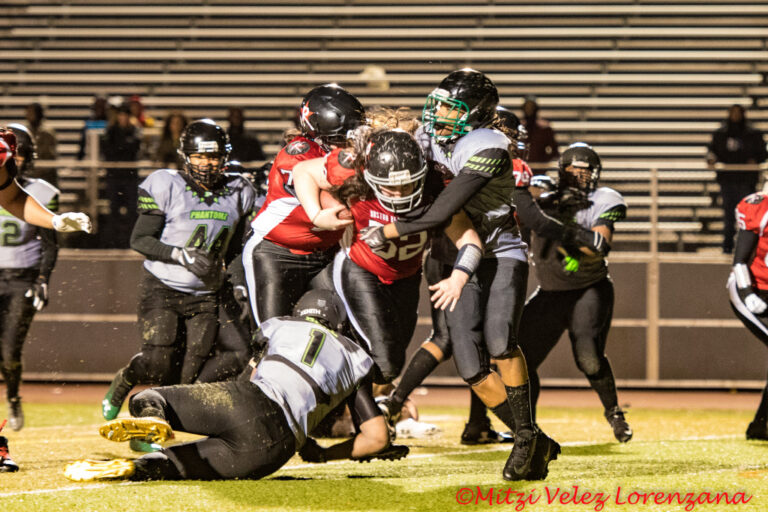 Renegades Grind Out Victory in Philly, 21-12

PHILADELPHIA — Chanté Bonds #21 rushed 20 times for 161 yards and a touchdown to lead the Boston Renegades to a 21-12 victory in their 2018 season opener against the Phantomz of Philadelphia. Jessica Penta #85 also rushed for a touchdown and collected two sacks on defense.

The Renegades’ pass-heavy attack didn’t soar in the early going, failing to reach midfield until their fourth possession, near the end of the first quarter. A more balanced mix of rushes and passes in the second period had Boston’s offense playing more on their opponent’s side of the field, and eventually, on their sixth possession, quarterback Allison Cahill #7 connected with Kathryn Tylander #15 for a 3-yard touchdown pass. Bonds rushed 6 times for 45 yards on the 59-yard drive.

Philadelphia’s closest scoring chance, a 1st-and-goal from the 2, was foiled when Renegades defensive back Mocha Torres #13 recovered a fumbled snap. Boston’s defense kept the Phantomz well contained for the rest of the half, holding them scoreless.

Torres struck again on the Phantomz’s first possession after halftime, knocking down a would-be touchdown pass and forcing a turnover on downs. With a short field on their next possession, however, Philadelphia managed to find the endzone, drawing to within one point.

The Renegades then committed to completely to the run game on their next drive, rushing 7 consecutive times into the 4th quarter. The outcome was a 50-yard drive and a 2-yard touchdown rumble by Penta.

Boston then took advantage of a tiring Philadelphia defense with big pass completions of 32 and 25 yards en route to a 3-yard ground score by Bonds. The extra point kick by Brooke Goodman #97 put Boston up by two scores and essentially sealed the game. Goodman was a perfect 3-for-3 on extra point attempts.

On Philadelphia’s final possession, Boston’s Charlene Casey #36 made a touchdown-saving tackle, and Briannah Gallo #24 knocked down a pass in the end zone to help the defense deny the Phantomz in the red zone for a third time on the night.

With the victory, linebacker Casey reached a milestone of 100 victories earned on the gridiron. Originally a member of the 2002 Mass Mutiny of the National Women’s Football Association, Casey is one of the sport’s most experienced players. Having competed at times in both spring and fall football leagues, Casey is now entering her 19th playing season. She joins Vicky Eddy, Amy Saur, Jennifer Olivieri, Shana Segers, Allison Cahill, and Jessica Cabrera as a member of Boston Women’s Football’s “100 Club”.

The Renegades will face the Phantomz again at their regular-season finale on June 9 in Revere, Mass. Boston (1-0) next faces the D.C. Divas on Saturday, April 14 at 6 PM at Harry Della Russo Stadium in Revere.