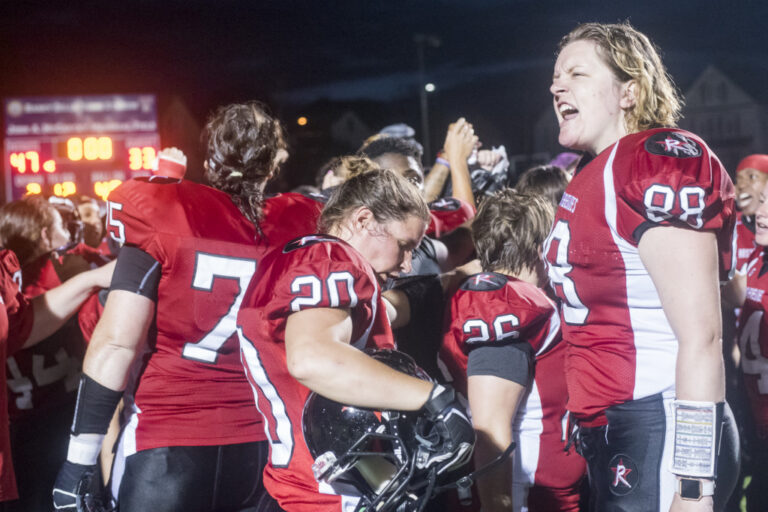 Boston Renegades against the Chicago Force in the WFA Conference Championships, July 8, 2017. Boston won the game 47-33 and will face the Dallas Elite in the National Championships on July 22.

REVERE, Mass. — July 12, 2017 — Boston and Chicago have met in the Women’s Football Alliance (WFA) playoffs every postseason for the last six seasons. It’s only fitting that the 2017 National Conference Championship game would come down to the Renegades and Force once again, with one team moving on to play in W Bowl II and the other, ending their season.

Earlier this season, on May 20th, the Renegades traveled to Chicago to take on the Force in a regular season tilt. Chicago built a 24-7 lead, before the Renegades stormed back for the 25-24 comeback victory. It may have been destiny that these two teams would have another epic battle in the playoffs. That is exactly what fans got on Saturday night.

Leading up to the game, Renegades quarterback #7 Allison Cahill told MyWSports, “We have to protect the ball. Our defense has been playing great and they will have to get the ball back.”

Boston’s offense came out on fire. They mixed up their formations and protected the ball with their dynamic rushing attack. The Renegades scored first on a run by #1 Angelica Pascual to take the early lead 7-0. Boston’s defense started hot in the first quarter forcing three-and-outs on Chicago’s first two possessions. Cahill rushed for the Renegades’s second touchdown making it 14-0, with 4:55 to go in the first quarter.

On the next defensive series, linebacker #52 Allie Genereaux stripped the ball from Force running back Kristy Moran and Boston’s Briannah Gallo #24 recovered the fumble. Genereaux lit up when asked after the game about the fumble, “We all wanted this; I was amped up! I saw the ball and just ripped it out.” Right away, Cahill hit #55 Steph Pascual over the middle for a passing touchdown, extending Boston’s lead to 21-0.

Boston took that lead into the second quarter with no signs of letting up. However, if anyone thought at the end of the first quarter that the Chicago Force were going to go away quietly, they were mistaken.

Chicago’s Sami Grisafe showed why she’s a great quarterback, threading the ball between two Renegade defenders to Tamika Robinson for their first touchdown of the game. After a three-and-out by Boston, Chicago drove the field again, but were stopped at the 17-yard line. The Force attempted a 33-yard field goal, but it was no good.

The Force defense stepped up big in the second quarter. A Chicago defender stripped the ball from running back #28 Stacey Tiamfook and took advantage of the Boston turnover by scoring a touchdown on a pass to Jeanette Gray with under 30 seconds left in the half. After trailing 21-0, the Force dominated the second quarter, scoring 14 unanswered points to make the halftime score 21-14.

Whether with halftime adjustments, or just the desire to win, the Boston Renegades always seem to know how to turn the fire back on when they need to. The third quarter was owned by the Renegades. Boston’s clutch running back #33 Whitney Zelee took over on the ground and in the air. First, Cahill found Zelee left alone on a broken play for an 11-yard touchdown. Later, the offensive line sprung Zelee for a 62-yard sprint to the end zone. #14 Marcia Beatty recovered a Chicago fumble on the ensuing kickoff allowing Boston to gobble up most of what remained of the quarter. By the end of the third frame, Boston extended its lead to 33-14.

The fourth quarter included two interceptions, 33 points scored, and one winner moving on to the WFA National Championship. Although Boston held a 19-point lead with 15 minutes to play, Chicago would engineer a fourth quarter run to make this a classic. With a drive already under way, Grisafe threw a slant route to Robinson, who took it over 50 yards for the touchdown, cutting the Boston lead to 33-20. On the next set of downs, Cahill lost a handle on the ball and Elisa Okrey picked it up and ran it back for another Chicago touchdown, bringing the Force to within one score, 33-26.

After a three-and-out from the Renegades offense, Boston’s defense reemerged with a key play when Gallo picked off Grisafe on a Chicago drive that could have tied the game. Wide receiver Adrienne Smith #10, responded with two consecutive receptions, including a 38-yard touchdown pass with 8:22 remaining to extend Boston’s lead back to 13 points.

Chicago kept fighting and with 4:09 to go, Grisafe steamrolled into the end zone, once again bringing the Force within six points. Grisafe said about still being in the game even until the end, “It’s the last game of the season — that’s what motivated both sides.”

In an effort to run the clock down, the Renegades once again called on Whitney Zelee. After the game Zelee said “Our O-Line was always one push away, I was always one cut away… we stayed consistent and when it was open, it was wide open.” Zelee found those wide open holes, gaining large chunks of yardage on multiple rushes, including a 40-yard run to bring the Renegades down to the Chicago two-yard line. Cahill gave the ball to Zelee one final time with 1:17 remaining and she scored the final touchdown of the night to seal the game for Boston. Cahill joined in on the scoring bonanza as well, running in the two-point conversion. The final score was Boston Renegades 47, Chicago Force 33.

Both teams knew this game would come down to the wire. Grisafe said “Boston is a great team and if you give them an inch, they’ll take a mile. They came out with more gusto than we did.”

Even with leads of 19 and 21 points during the game, Cahill knew Chicago was never out of it, saying “It’s the tricky part of playing a really good team: you come out with everything working, then you hit a couple road bumps and you gotta maintain your confidence because know they’re not going to give up.”

The Boston Renegades will play the Dallas Elite at WBowl II in Pittsburgh on July 22nd. Catch the coverage on MyWSports.

(Click here to read a pdf of the article as it appeared on MyWSports.com)