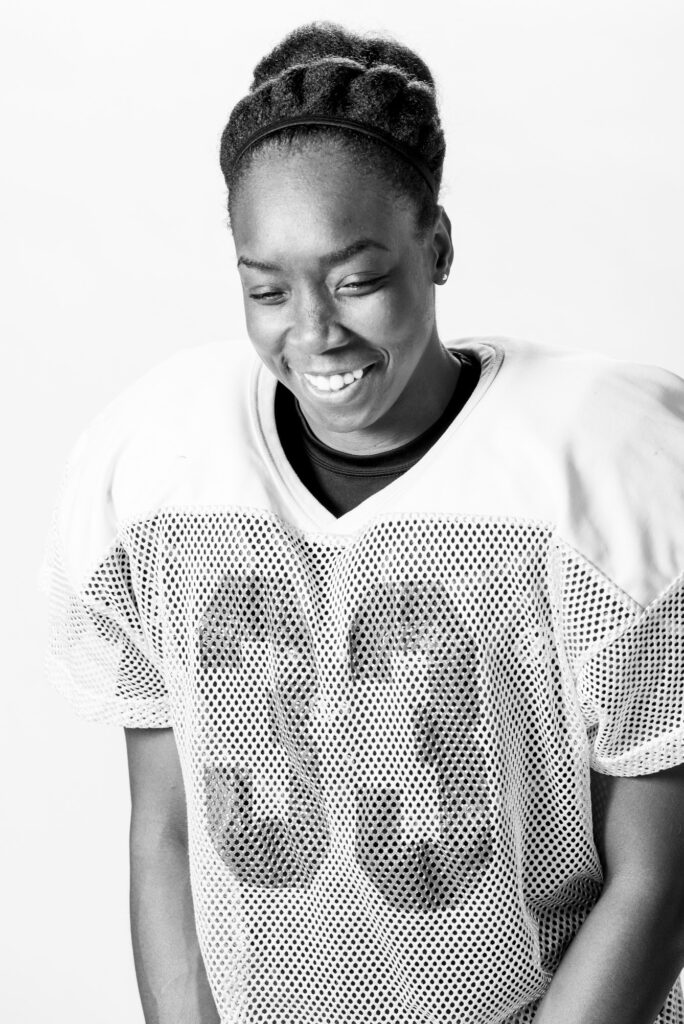 Whitney Zelee is one of the greatest running backs in the history of the sport.

Zelee is a Boston native and a graduate of the Winsor School and the College of the Holy Cross. She has a scholastic athletic background in soccer and dance.

Whitney joined the Boston Militia’s backfield in 2011, and as a rookie, was named the Most Valuable Player of the Women’s Football Alliance (WFA) National Championship Game that year. She finished the game with 101 rushing yards and three touchdowns as the Militia defeated the San Diego Surge 34-19.

Zelee posted an impressive 2012 campaign, averaging 137 yards and 3 touchdowns per game. She finished 7th in rushing yards, 5th in yards per carry, and third in scoring for the WFA, despite a two-game stretch with only a single carry.

In 2013, Whitney Zelee eclipsed the 2,000-yard benchmark and set a new Women’s Football Alliance rushing record. Running behind the offensive line of Rese Woodfine, Amanda Alpert, Steph Jeffers, Kehinda Oshodi, and Beth Kaleta, Zelee amassed 2,138 rushing yards over the eight-game regular season, and 2,832 rushing yards over the entire championship season. The accomplishment put her in the national spotlight and earned her the league’s Most Valuable Player award that year.

During her historic 2013 season, Zelee posted four 300+ yard rushing performances — an accomplishment that was unprecedented and remains unmatched in both women’s and men’s football. She set the single-season scoring record in the WFA with 34 regular season touchdowns. And Whitney set a new WFA record for touchdowns in a game with 8 against the D.C. Divas on 5/18/2013. Her record-setting year earned her a nomination for a Globie Award for Best Female Athlete. Created by Boston Globe Media, The Globies honor the best in New England sports annually.

After missing the 2014 regular season with an injury she sustained in the first game, Zelee came roaring back in the playoffs. She astonishingly scored 20 touchdowns and rushed for 1,043 yards in only four postseason games. Whitney was again named the Most Valuable Player of the WFA National Championship Game after leading Boston to a 69-34 victory over the San Diego Surge with 291 rushing yards and 6 touchdowns, the most ever scored by an individual in a WFA National Championship game.

Whitney outpaced her contemporaries, amassing 7,226 yards and 121 touchdowns on 674 carries in 48 games. She averaged 151 yards and 2.5 touchdowns per game over her career.

Zelee retired after the 2018 season. Her struggles with being unable to return to the field is one of the focal points of the documentary Born to Play.