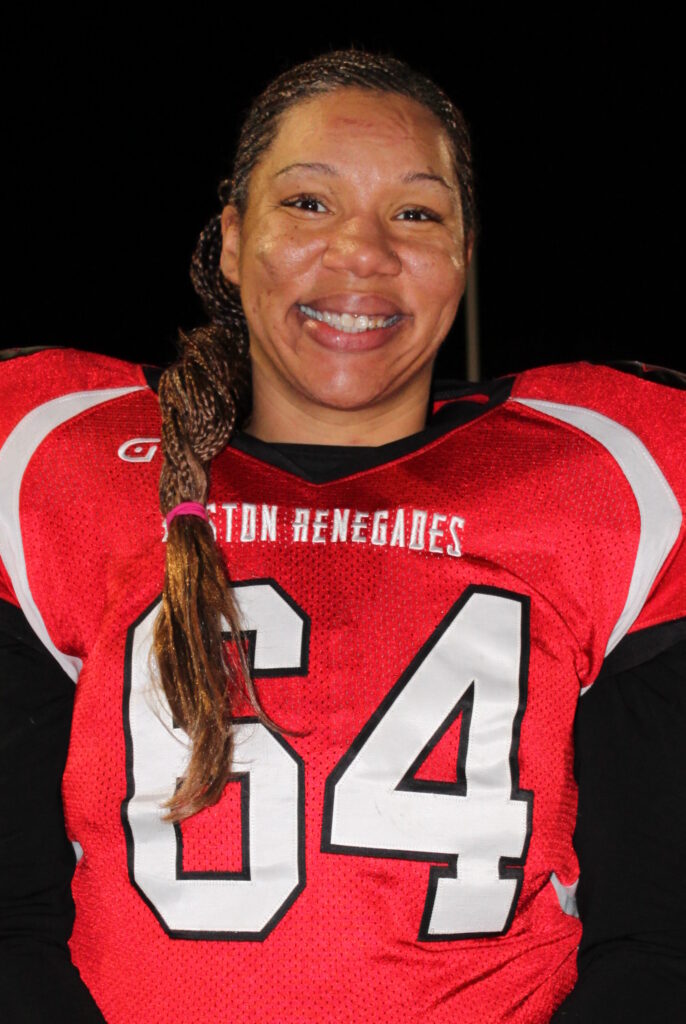 Shana Segers began her football career in 2003 with the New Orleans Spice of the National Women’s Football Association (NWFA). She played for the New York Sharks for seven years from 2004 to 2010. Segers joined the Boston Militia in 2011, winning championships in 2011 and 2014. She also helped the Boston Renegades to titles in 2018 and 2019. Shana became a member of Boston Women’s Football “100 Club” on April 24, 2017 when the Renegades defeated the D.C. Divas in overtime, 26-22.

Segers was a prolific collegiate athlete. She was a three-sport letter winner in basketball, track, and volleyball during her time at Johns Hopkins University. Shana enjoyed both individual and team success in all three sports.

Segers made her mark in basketball as a powerful inside force on four of Hopkins’ greatest women’s basketball teams. She is one of just two players in the school’s history with more than 1,000 points and 1,000 rebounds. Shana ranks ninth in points (1,121) and second in rebounds (1,100) and rebounds per game (9.6) for the Blue Jays. She also ranks among the all-time leaders in blocked shots (69), free throws made (221) and attempted (399), games played (114) and minutes played (2,762). Segers earned All-Centennial honors three times and All-UAA honors twice, including first team honors from both leagues as a senior.

In addition to her exploits in basketball, won the 1998 and 1999 Centennial Conference Outdoor Shot Put titles. She also helped the Blue Jays volleyball team advance to the ECAC Semifinals. The 27 victories Hopkins accumulated that season remain the second-highest single-season total in school history.

Shana Segers was inducted into the Johns Hopkins University Athletic Hall of Fame in 2012.

Shana went on to coach volleyball and basketball at SUNY Old Westbury from 2004 to 2009. She was also a staff coach for the women’s AAU basketball team, the Long Island Wave.

Shana is a health care professional. She was an ICU nurse before graduating from Albany Medical College in 2015. Dr. Segers completed her residency in Anesthesiology at Emory University. She is now completing a fellowship in Critical Care Medicine at Stanford University.