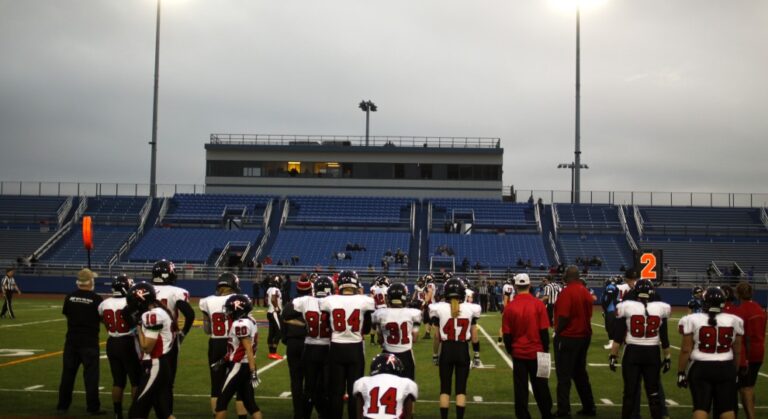 [Photo] A view from the sideline as the Boston Renegades take on the New York Wolves on May 4. Esteban Bustillos/WGBH News

May 16, 2019 — Kickoff isn’t for another eight hours, but the undefeated Boston Renegades are already dealing with a false start.

It hasn’t even been 30 minutes on the road, and the bus the team rented for the trip from a hotel in Waltham to a field in Long Island for a game against the New York Wolves is smoking in the back.

It’s another story players can add to the long lists of tales from the road, where the bonds forged for the team can be just as important as the games themselves.

Tiffany Young has been with the Renegades since 2016. She’s sitting out this year due to injury, but still traveled with the squad to New York. And she’s got stories. She vividly remembers a trip to Cleveland her rookie year that somehow got worse after a 13-hour bus ride.

“We woke up to snow. We had to play the game in the snow. We also had to shovel the field,” she said with a laugh. “So yeah, it’s just, you never know what happens on the road.”

The Renegades are part of the Women’s Football Alliance. It’s as close to professional football as women can get, but players aren’t paid. Each player actually pays between $750 and $1,500 in dues each season. But this is the top women’s football league in the country.

The league is comprised of nearly 70 teams across three divisions. And right now, Boston is the defending Division I national champion.

Getting to take a bus as a team is a bit of a change for the Renegades. Usually, players find their own way to road games and the team covers hotels.

The players are mostly quiet on the way down as they get their minds set for the game. Some nap, others munch on snacks and others watch the movies selected for the drive’s entertainment: “Varsity Blues” and “A League of Their Own.”

The mood is loose, but focused. And that’s exactly what head coach John Johnson wants.

“For us, we actually really enjoy the road games ‘cause it allows our ladies who have everyday lives, they have jobs and all that, so the more time we can get them away from all of that and really get them focused in on the details of football,” Johnson said. “And we have a lot of expectations and a lot of things going on, so there’s some things that we really need them dialed into.”

Not long into the game in New York, things get weird. The Renegades dominate the first half and go into the locker room with a 34-7 lead. Then, in the third quarter, a strange fog falls over the field that makes the stadium look like a scene from a Stephen King novel.

Play starts to get sloppy and at one point, after one of the Renegades’ multiple sacks, a ref walked to the sideline and asked the women to “tone it down with all the hitting.”

Players said later that would never happen in a men’s game.

Boston goes on to a 40-13 win, in part thanks to a stellar performance from rookie running back Ruth Matta. She finished with 175 all-purpose yards and two touchdowns.

And while this is her first bus trip with the Renegades, every game is a sort of away game for Matta, who came here from the U.K. to play with Boston. She started playing football after a friend on her rugby team took her to a practice. Now, she wants to play with the best, even if that means getting playfully teased for being from across the pond.

“I mean, I am far away from home. It has some challenges, but the team have been great,” she said. “Like, they’ve welcomed me. You know, they’ve all been so supportive and look after me and give me a lot of stick ’cause I’m British, which is good. But yeah, they’ve made me feel right at home here.”

There are stories like Matta’s, of people finding a home on the team, up and down the roster. Tori Noda first started playing football on the West coast, but recently took a job as an athletic trainer at Northeastern University.

“It’s not easy to just move your life from coast to coast. I’ve got nobody out here, really. Just me,” she said. “But this team is kind of like my family. It’s like the one the one thing that’s consistent and solid. So just being able to play football with these ladies and come out and bond through adversity, good times and bad times, that’s what it’s really about, honestly.”

After traveling for most of the day and playing a football game, the bus doesn’t get back to Waltham until just after 4 a.m.

Being on the road means long, hard days for the Renegades. But moments like these, when the Renegades can be themselves in their own space and just be players with a passion for the game, make it all worth it.