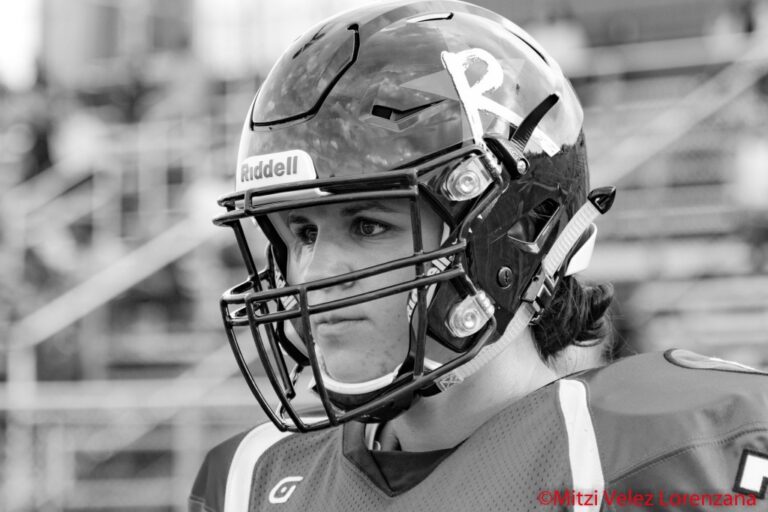 With a rugby background, the North Andover alum knew what was coming. Her experience as a marketing intern with the Boston Renegades also showed her what the Women’s Football Alliance was all about.

Before this season, she took a shot trying to make the team. Now, she’s headed to Atlanta with the rest of the squad looking to avenge last season’s championship loss.

“I had interned when I was younger here,” she said. “That was the first I heard of them and it caught my eye. I just didn’t have the time to get there or the resources. This year I did. My only regret is I wish I signed earlier, but I guess this was a good year to sign on.”

Fournier plays defensive line and hadn’t played football at all until this season. She played rugby at the University of New Hampshire, where she graduated in 2014, after playing basketball and softball at North Andover. She currently serves as the Harvard University water polo operations assistant.

Football wasn’t in her plans, and coming in raw had its challenges. But, with a backbone like the Renegades have, Fournier has taken it on.

“You lean on the veterans a little bit,” she said. “They text me about film, things I can get better at. A lot of girls come from athletic backgrounds and transfer over those skills.”

Playing defensive line has its similarities to rugby, also being a contact sport. But it’s still a different game, and it’s something many of the players in the WFA are up against without many chances to build a background in the sport before reaching the highest level.

“Other than their mindset, learning new techniques from them has been great,” Fournier said. “Coming from rugby, the big difference is it’s a bigger stage than I’ve been on. They really teach you how to stay focused during the season and not just for the one game.”

The Renegades roster has mostly local talent, with athletes also coming from Lawrence and Methuen, such as star running back Angelica Pascual of Lawrence, who played basketball at Mount Holyoke College.

Most of the roster is back from last season, so this is a spot they’re familiar with. Fournier has learned the sport on the fly, and also how to win.

That next learning experience just happens to be in a title game.

“Everyone is in a really competitive set,” she said. “Me being a rookie, I don’t have that background, but it’s great to feed off of them. You see the veterans, like our quarterback and the girls on the D-line, they set a great example for us. The vibe is upbeat, but they know what we’re going into so they’re pretty serious.”

The Renegades will face the LA Warriors in Atlanta on Saturday night looking to earn a national championship.

“We have to stay focused and communicate,” Fournier said. “Whenever we do that we’re pretty unstoppable. As long as we do that, I think we can make the result in our favor.”