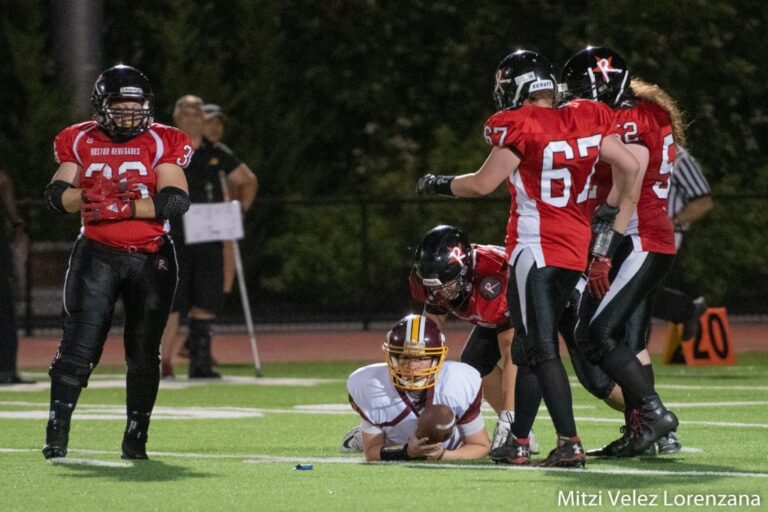 BOSTON – Nine players from the Boston Renegades have been recognized as All-Americans by the Women’s Football Alliance (WFA). The complete All-American team rosters were revealed on the WFA’s website and social media platforms on June 7.

First Team players are invited to represent the league’s National Conference at the WFA All-American Game in advance of the WFA National Championship Game. Both games take place on Saturday, July 13, 2019 at Campbell Field on the campus of The Colorado School of Mines.

Rather than playing in the All-American showcase, the Renegades prefer to play in the WFA National Championship Game in pursuit of a repeat. Last season, Boston defeated the Los Angeles Warriors 42-18 to claim the 2018 league title.

Standing in the way are Boston’s long-time rivals, the D.C. Divas, who visit Revere this Saturday for the conference championship. D.C. has fallen twice to Boston this season, 34-32 in April and 62-32 just two weeks ago. Kickoff is slated for 6 p.m. at Harry Della Russo Stadium.

Allison Cahill #7, Quarterback, WFA First Team All-American
This is Cahill’s twelfth consecutive all-star selection. She is the league leader in touchdowns (34), touchdown-interception ratio (34/2), and completion percentage (65.8%). Cahill remains the only women’s football’s quarterback to have reached 100 career victories. A basketball star and all-time leading scorer at Uxbridge (Mass.) High School, she went on to play point guard for the Princeton Lady Tigers before pursuing football.

Allie Genereux #52, Linebacker, WFA First Team All-American
Genereux has earned her third All-American selection in as many years. She is in the league’s top five in tackles and sacks. Genereux transitioned from basketball to football while at Greenfield (Mass.) High School and has stuck with the sport since. Prior to joining the Renegades, she helped the New England NightMare to the U.S. Women’s Football League (USWFL) championship game in 2015.

Angelica Pascual #1, Tail Back, WFA First Team All-American
This is Pascual’s second All-American selection. She is top five in the league in rushing yards and touchdowns for the second consecutive season, and this year she ranks third in touchdowns. Originally from Lawrence, Mass., Pascual was a basketball star at Mount Holyoke College where she was the leading scorer all four years she played. She still holds single game records for points scored, field goals made, and 3-point field goals made, and is the third all-time point scorer in school history.

Ruth Matta #22, Tail Back, WFA First Team All-American
In her first season in the WFA, Matta ranks second in the league in touchdowns, and in the top five in rushing yards and rushing touchdowns. She is also one of Europe’s most decorated players. As a member of the Birmingham Lions of the British American Football Association (BAFA), Matta is twice an Offensive Player of the Year and also a six-time UK National Champion. With Great Britain’s national team, she is a European Silver Medalist, and she was awarded MVP at the 2017 IFAF Women’s World Championships in the Bronze medal match against Mexico.

Hillary Crook #75, Offensive Line, WFA First Team All-American
This is Crook’s first All-American selection. She attended Jacksonville University where she was a three-time American Sun (ASUN) Conference indoor shot put champion. AShe is also a two-time ASUN Conference outdoor shot put champion. Prior to college, Crook was a three-time champion in Massachusetts for shot put while at Mansfield (Mass.) High School, where today she teaches health and physical education and coaches field events for the track and field program.

Ash Beckham #80, Center, WFA First Team All-American
This is the first all-star selection for Beckham. She attended Bowie High School in Arlington, Texas where she competed in softball and wrestling. As an adult, she became a practitioner of jiu jitsu before pursuing football.

Danielle Fournier #70, Defensive End, WFA First Team All-American
This is Fournier’s first All-American selection. In her second season, she has become one of the league’s top tacklers and she ranks top five in sacks. Fournier played rugby at the University of New Hampshire, where she graduated in 2014. At North Andover (Mass.) High School, she played basketball and had a stellar softball career where she was named a team captain, Rookie of the Year, and a Cape Ann League All-Star.

Shantia Creech #5, Cornerback, WFA First Team All-American
This is Creech’s third All-American selection. She is the league leader in interceptions (12), interception return yards (295), and interception return touchdowns (5). She also ranks in the top five for pass deflections and kickoff return yardage. Before joining the Renegades, Creech was a top player on the Philadelphia Phantomz. She was a standout basketball player at James B. Hunt High School in Philadelphia, and a collegiate basketball player at Goldey-Beacom College.