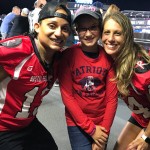 Earlier this summer, the Boston Renegades, the region’s semi-professional women’s tackle football team, came home from the Women’s Football Alliance (WFA) Division I National Championship with the title and new hardware. The Renegades topped the undefeated Los Angeles Warriors, 42-18, in the championship on July 28.

In honor of their championship victory, the Renegades celebrated at Gillette Stadium for Thursday night’s preseason game against Washington, and for the assistant head coach, it was a bit of a homecoming.

Former Patriots linebacker Vernon Crawford has worked on the coaching staff for the Renegades (previously the Boston Militia) since 2008, and he said to be celebrating his new championship team at the home of his former team was a special moment.

“For me, it’s a great double whammy. Unfortunately, the Patriots didn’t win the championship, but winning and getting a chance to share this whole thing, it’s great for New England,” Vernon said. “It shows that we’re still dominant at everything. I’m just happy to be a part of it.”

The team was honored on the HD boards during the game, and the Gillette Stadium crowd welcomed them warmly. It was a fitting place for them to be, he said. The Renegades fought hard for their victory and faced injuries throughout the season, according to Vernon, and incorporated lessons he learned from the Patriots into how the team prepared.

“We willed our way to win. It’s basically the same thing here where it’s next man up,” Vernon said. “That means you’re coaching everybody, not just coaching a couple. When you coach the details, those things show.”

Quarterback Allison Cahill, a 15-year-veteran, said the team had the perfect combination of youth and experience to make the championship run.

“We have a lot of young players. They grew up quickly. We asked a lot of them and put a lot on their plates,” she said. “Our regular season losses were close ones, and we had a chance to avenge those in the playoffs against the same teams. It was a credit to a lot of the young players and a credit to some of us veterans for showing the way, letting our experience and our youth be a formidable combination.”

As a league, the WFA has 62 teams across three divisions, opening the game of football up to women on a semi-professional level who, at one point, may not have thought this opportunity possible.

“There’s nothing gendered about skill,” Allison said. “It’s a matter of presenting the opportunity to people who haven’t had them before. If more people were aware, there’d be more female athletes that would gravitate to football.”

And to have coaches, like Vernon and former Patriot Patrick Pass, treat her and her teammates like any other players they’ve coached.

“It’s a huge credit to our coaches, two coaches who played in the highest level, and they think we’re worth their time, energy and effort. They don’t see us as women playing football,” Allison said. “They see us as football players. It’s never lost on me how grateful we are to have the opportunity.”

Vernon said that the WFA and his team’s run this season confirm the adage that “you can do anything when you put your mind to it.”

“With hard work and perseverance, you can do anything. Most of these women have families. Women out there are still sacrificing to make this happen,” Vernon said. “We have at least two doctors on the team. Football is something they want to do. I always tell people you make time for what you want to do. They really commit themselves and dedicated themselves to wanting to be a national champion, and they didn’t stop.”