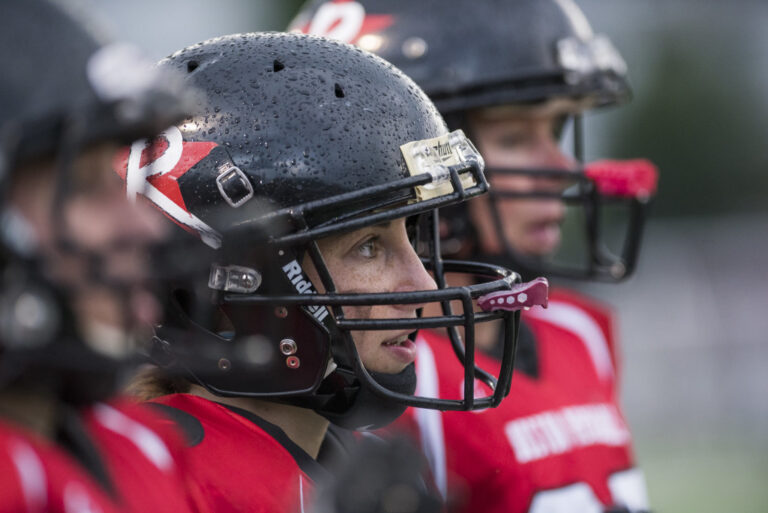 GOLDEN, Colo. – July 17, 2019 – Multiple titles, a veteran quarterback with no need to slow down and two prominent Jewish players, this New England team is one of the best in the nation … but it’s not the Patriots.

The Boston Renegades, a semipro women’s tackle football team based in Revere, played in its third consecutive Women’s Football Alliance National Championship game here on July 13. The team successfully defended its title as reigning champions after beating the Cali War for the second straight year.

Formed in 2015, the Renegades was part of the rebranding of the Boston Militia after it switched ownership, somewhat similar to the Militia’s formation in 2008 after a merging of other teams from the area.

Captain Sami Bloom, 26, a defensive back for the Renegades since 2016, and Amanda Alpert, 35, who plays center and has been with the team since its formation, fell in love with the game early on.

“I had always wanted to play football because I grew up watching the Patriots,” Bloom explained. “As soon as I found out A there was an opportunity for women to play football at a high level, I jumped at it.”

Alpert learned about the sport from a college crew coach and decided to try out for the then-Bay State Warriors while on Thanksgiving break. She began playing right after graduation.

“When I graduated and was done competing for track, I came home and was at practice the next Tuesday,” she said. “Since then, I’ve been hooked.”

Bloom admitted there are challenges to being a professional athlete.

“Being a semi-pro football player is no cake walk,” she said. “Everyone on the team has full-time jobs on top of practicing two-to-three times a week and dedicating full Saturdays to games.” For the past three years, Bloom had been playing football while also studying full-time at Northeastern University School of Law. She is currently studying for the bar while not on the field.

“Two practices a week and 10 games a year doesn’t sound like much, but it adds up,” added Alpert, who in addition to playing football is the athletic director at Chelsea High School.

On top of being dedicated players, both women are Jewish, which can add its own challenges to maintaining an athletic career.

“The hardest part has been keeping Passover for away games,” said Alpert. “There are practices or games that I’ll bring Sami something that I made because she keeps Passover, too.”

“I never thought about not playing because of being Jewish,” she added.

Bloom said that, if anything, the game and the family that the Renegades have formed together allows her to connect with her Judaism even more.

“The most important thing that I learned growing up in the Jewish faith,” she said, “is the importance of community and the supportive aspects of bringing different backgrounds [of] people together. When I was presented with the same sense of community with the Boston Renegades, it recalled for me the closeness of the Jewish community and made me feel at home.”

“The team becomes like a family,” she said. So much so, in fact, that her ketubah was signed by two other Jewish players – the same teammates who attended her son’s brit and her daughter’s baby naming.

Both Alpert and Bloom played in the 2018 victory, too.

“Last year’s championship win was absolutely incredible,” Bloom said. “When the clock ran out and we were standing as national champions on the field, it was such a surreal moment because of how much we had put into the season.”

Though this would be the third time in three years that the Renegades made it to the championships, the team only had one win under its new name. With the Militia having won three championships before reorganizing as the Renegades, Alpert said there was pressure to repeat in order to step out of the Militia’s shadow.

“This year’s win would prove to everyone that last year wasn’t a fluke,” she said. “That we are legit.”

In order to make that dream come true, Alpert said, the team needed to “communicate and do our job.”

Bloom agreed. “We have put in all of the practice, blood, sweat and tears necessary to go out there and win,” she noted before the same. “As long as we do exactly what we know how to do on the field and trust each other, we should walk away as repeat national champions.”

That sentiment proved true. After a late start due to weather and a slow showing in the first quarter, the Renegades beat the Cali War 52-24, giving them the back-to-back win they had hoped for and solidifying them as a force to be reckoned with in the league.

What helped them prepare for the win?

“Before each game, the team takes a knee – I stand – in the locker room and we have a silent prayer,” Alpert said. “The last thing I always say is, ‘Hazak, hazak, venithazek – be strong, be strong, and let us strengthen each other.’”