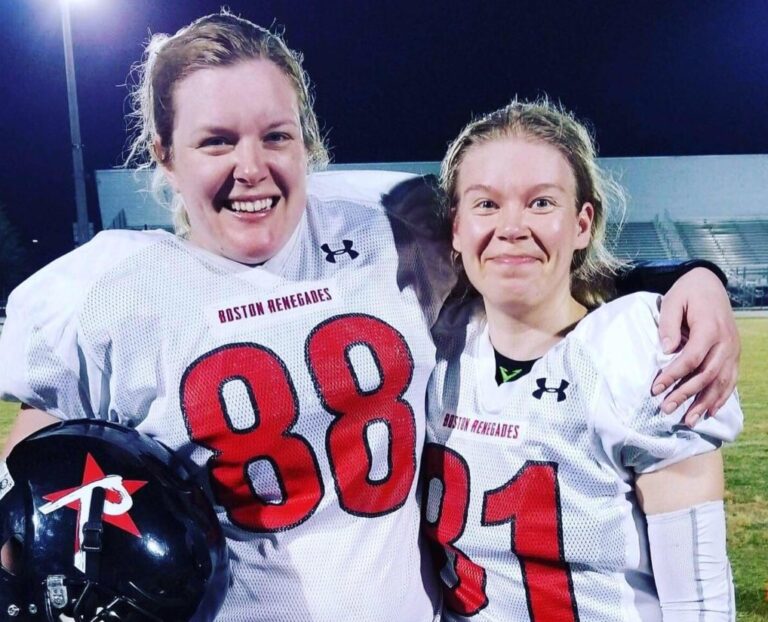 Helsinki Roosters wide receiver Janna-Jemina Seiles has taken on a new challenge by playing football in the United States with the Boston Renegades of the Women’s Football Alliance (WFA). The Renegades compete at the highest level in the WFA — Division 1 — and they are the reigning national champions. Boston’s General Manager Ben Brown feels that their new player is a great asset to the team.

“We are very excited about JJ joining the Boston Renegades this season,” said Brown. “Our goals as an organization are to win championships and create opportunities in football for women and girls. Having a highly skilled, reputable international player like JJ on our team brings us attention that can help us achieve these goals.”

Brown is pleased with what he has seen so far, and expects Seiles’ contributions to grow as the season continues.

“JJ has a strong work ethic and has made considerable progress since joining the team,” he said. “As she gets more and more familiar with our playbook, we expect that her speed and abilities will become an important part of our high octane attack.” Brown added, “JJ is also good at coaching, and we have had fun learning more about Finnish culture and hearing about her past experiences playing football.”

“We appreciate the sacrifices JJ has made to get here to play for Boston this season. It takes an incredible amount of courage and commitment to move to another country and join a team you don’t know about. We are honored that she chose us.” Brown continued, “We cannot do enough to express our gratitude to her, as well as her family, friends, and teammates in Finland who have given her so much support. We look forward to enjoying a great season with her!”

Here are Janna-Jemina Seiles’ thoughts on playing in the United States:

Why go to the USA?

“Playing in the United States had been on my mind since 2013, but very few players had done it before. However, after attending the 2017 Women’s World Football Games in Orlando, Florida, the idea of playing ​​a full season in another country no longer seemed impossible. The opportunity came when I finished school last summer; my new job has given me the flexibility to turn this dream into a reality.”

“How is it working with the team?”

“I believe that a person reaches her potential by constantly challenging herself. Boston has a strong team and there is tough competition, so I feel that this team is a great place for me to learn more and develop as a player. My new coaches and teammates have been very welcoming and helpful in every way. And General Manager Ben Brown has been an invaluable help and support during this process.

“Learning the new playbook has required the most time. The playbook here is much thicker than what we use in Finland. Fortunately I have been helped by coaches and friends. The workouts, too, are very focused because performing at this level requires a lot physically.

“I am growing more accustomed to the game day routine. Road games, of course, require a little getting used to, as the distances are much longer than when traveling in Finland. The first game of the season was in Florida. Florida, three hours away — by jet plane! This week, we travel to Washington, D.C. to play against D.C. Divas.”

What expectations and goals do you have for the season?

“My goals for this season are to develop my skills as much as possible and become a better player. Of course, I also want to earn playing time and opportunities to show what I have learned, so developing skills through practice is important. Practicing against a fast defense and the speed of the game challenges you to examine yourself and try different ways of doing things.