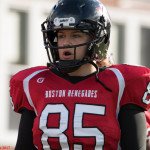 Penta, who played Revere Pop Warner football for three seasons at the “old” Della Russo Stadium on the very same site, is a starting linebacker for the undefeated Renegades (9-0) who will be facing the Chicago Force for the right to advance to the W-Bowl, the WFA version of the Super Bowl, in Pittsburgh.

Penta made a key defensive play with two remaining in the conference semifinal to help the Renegades pull out a 27-24 victory over the Washington D.C. Divas. Blitzing on the play, Penta made a jarring tackle in the backfield and forced a fumble that the offense turned in to the game-winning touchdown.

The face that the Renegades are playing for the conference title in Revere is especially significant for Jess, daughter of Cynthia Penta and the late Richard A. Penta, a personable, witty and widely admired Ward 1 city councillor who passed away on Feb. 25, 2015.

“My father would be ecstatic that we were playing the championship game in Revere,” said Jess. “My mom said he would have been telling everybody at City Hall and all the councillors would have been there. It’s going to be exciting to play in front of my hometown fans. A lot of my family and my high school friends will be there. They’re all big supporters, especially my younger brother, Louis.”

Reflecting on her introduction to tackle football in this city, she said, “My three older brothers (Richard, Steven, and Mario) had played Pop Warner and my parents were on the board of directors. They were going to sign me up for cheerleading but I said, ‘no, I want to play football’ and my dad said, ‘OK, if you think you can do it, we’ll let you try it.’”

Penta played three seasons at tight end and safety for the Revere Junior Patriots ‘D’ and ‘C’ teams. She was the only girl on each of the teams.

Penta continued her participation in sports at Revere High School, playing four years of soccer and serving as a team captain while also playing RHS basketball and softball for two years. She went on to be the starting goalkeeper for the UMass/Boston women’s soccer team. She received a degree in Business Management in 2009 and currently works at JetBlue Airlines.

While she was senior at UMass, Jess decided to tryout for the Bay State Warriors women’s professional football team. The team later became the Boston Militia under the ownership of car dealership king Ernie Boch Jr. Penta has played eight seasons, winning two championships with the Militia.

“I’ve always loved football,” said the attractive, 31-year-old Penta, who is 5-foot-8. “My mom saw an ad in the Journal for a tryout for the Bay State Warriors so I tried out, I earned a spot on the team, and I loved it.”

Richard A. Penta immediately became the pro team’s super fan, starting each game day with a tailgate party in support of his daughter, Jess. Family and friends would convene for the pre-game ritual during which the popular city councillor held court and made people smile with his wit and wisdom, much as he had done on so many occasions at the Beachmont Dunkin’ Donuts with his constituents and neighbors.

“My dad was my biggest fan and my biggest critic,” said Jess. “He kept it real all the time. He used to come to my soccer games and we’d win 3-1, and he would ‘what happened on that one goal?’ I’d say, ‘Dad, but we won the game!’”

Being a women’s professional football player takes a huge commitment. Players have full-time jobs during the day and attend practices 2-3 times a week that end at 10:30 p.m. The team travels to other states for games on weekends.

“It’s a big commitment and it takes up a lot of your time,” said Penta. “I tell people that I play tackle football, and they say to me, ‘you’re crazy, what if you get hurt? How will you be able to work?’”

Penta has sustained injuries in her career. She tore the heel in her left foot last season and missed a few games. She has played through sprained ankles and broken fingers along the way. “But I want to play. I still have that competitive spirit in me.”

Women’s football is gaining in popularity, according to the Revere native. Attendance increased at games this season. There is a Women’s Football World Games featuring six nations. ESPN3 will live stream the WFA championship game.

“We’re working toward getting our games on ESPN2 and other stations,” said Penta, whose favorite NFL player is Patriots linebacker Dont’a Hightower.

The Renegades are coached by John Johnson and have two former New England Patriots players (Vernon Crawford and Patrick Pass) on staff. The organization is seeking its first championship.

From Pop Warner to Powder Puff (she scored two touchdowns in Revere’s win over North Reading) to professional football, Jess Penta will be back in the sports spotlight Saturday night looking to win a championship in her hometown.

And Richard A. Penta will be there in spirit.

(Click here to read a pdf of the article as it appeared on RevereJournal.com)