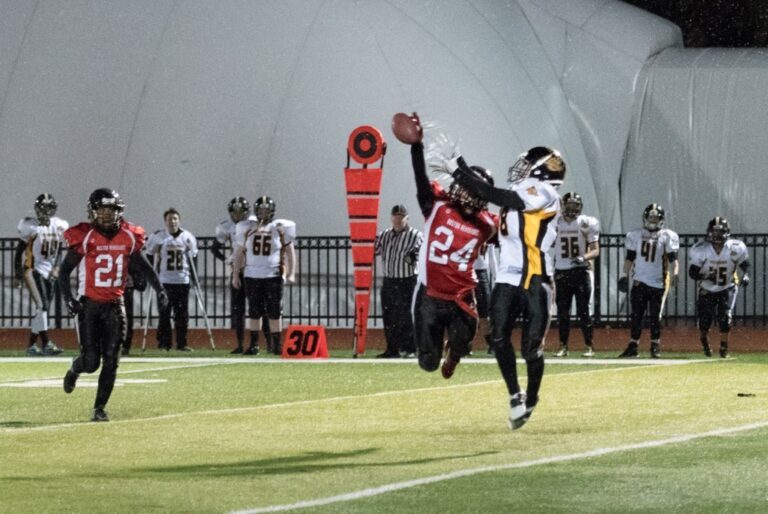 [Photo] Briannah Gallo is one of the best pass defenders in women’s football and recently won another national title, the fourth of her career. Courtesy photo/Mitzi Velez Lorenzana.

Ever since Briannah Gallo was a little girl she always wanted to play tackle football. It wasn’t available for girls at that time, but she got her first opportunity 11 years ago — and has been on four national champion teams since then.

The latest came just a couple of weeks ago on July 28 in Atlanta, Georgia when the Boston Renegades upset previously unbeaten LA Warriors, 42-18 to win the Women’s Football Alliance national championship at Kennesaw Stadium.

“We had two losses coming in, and they hadn’t lost any games until the finals,” said Gallo, a defensive back who plays cornerback and safety. “We were definitely not favored. I was injured part of the season, but I played through it.”

Gallo did some extra work on the track at Peabody High to get ready for the playoffs. She is a manager at Dick’s Sporting Goods in Saugus, and the former Tanner was a Greater Boston League all-star in cross country and track, training that she said is helpful in football.

“I went to Peabody High on nights we didn’t practice to do some agility work and sprints,” she said. “I needed to strengthen the ankle, and it helped.”

Earlier last month the Renegades earned the right to advance to the finals by edging arch-rival Washington, D.C. Divas, 34-32.

“It’s always us or them going to the championship so that was a very exciting win,” said Gallo. “They’ve been our big rival for as long as I can remember, and it’s always back and forth. We beat them in the first regular season game, and then they defeated us. Fortunately, we were able to get by them in the playoffs.

“We’ve got a lot of veteran players on the team, and our coaching staff is great (John Johnson is the head coach). They are able to make adjustments to the other team’s plays and always get us prepared. We have so many athletic people with experience it makes a huge difference.”

The championship was the first for the Renegades in the WFA and fourth overall for Gallo in her career that began with the Boston Rampage in 2007 as a wide receiver/cornerback. Two North Shore teams combined to form the Boston Militia, which won a championship in 2014. Gallo was a member of the Militia from 2008 to 2014.

“After (car dealership owner) Ernie Boch decided to walk away and not sponsor us a great number of alumni players established the Boston Renegade in order to keep a woman’s football team in the city. The last four years I’ve been playing for the Renegade, and I just love it. I’ll keep going as long as I can,” she said.

How Gallo got her start

One day Gallo heard a commercial on the radio about a women’s football team looking for players and decided to try out. Playing tackle football is a huge time commitment with organized practices at Harry Della Russo Stadium in Revere two to three times a week during the season and more often when playoffs roll around.

“The games start in April, but we begin with OTA’s indoors in January,” said Gallo. “Then after the season ends we have a couple of practices in September and October to invite new people to join the team. I’ll take a couple of weeks off now to get my body rested up, and then start working out again.”

The D.C. game was the only close one in the playoffs. Renegade beat up on Pittsburgh, 63-26 in the quarterfinal round. The championship celebration started in Atlanta and is still going on.

“We had a party in the hotel after we won,” she said. “The best thing was being honored by the Patriots last Thursday night during their first exhibition game against Washington. One of our coaches, Vernon Crawford, is a former Patriot, and he arranged for the team to get tickets. We were on the Jumbotron, and they made the announcement we were national champs. It was a lot of fun.

“We’re having a get together for our fans to take pictures, and there’s going to be a Duck Boat celebration with fans some time in early September. It’s all been a lot of fun for us, and it’s not over yet.”