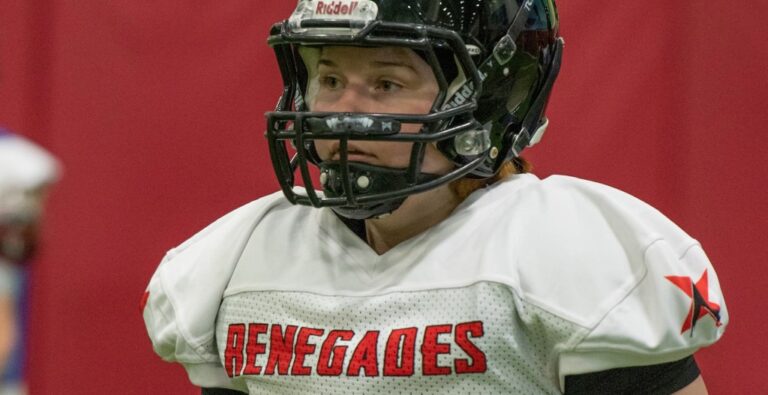 The American Football Association of Finland recently published an interview with new Boston Renegades running back Tytti Kuusinen, whose dream of playing football in the United States has been delayed by the onset of the Coronavirus pandemic. An English translation of the article follows.

When Coronavirus changed everything

The rapidly spreading Coronavirus epidemic has affected the daily lives of every Finn. The sporting world has come to a complete standstill. Athletes and teams are having to get used to new ways of maintaining their own fitness in isolated conditions. Vaahteraliiga.fi tells five stories about the situations of Finnish American football players in the midst of the COVID-19 crisis.

Tytti Kuusinen, 27, is currently the brightest Finnish women’s American football player. The running back, who lives in Espoo, tried American football for the first time at the age of 19 and has since become the best player at her position in Finland. Switching from soccer, the young Kuusinen first took up American football with the Seinäjoki Crocodiles, and after taking a job in metro Helsinki, she moved to Espoo and joined the Helsinki Wolverines.

Tytti, who works in the field of occupational health and safety, has also been part of the Finnish national team for five years. The strong-legged running back has been awarded several gold medals from the Maple League and she holds gold medals from the 2015 and 2019 IFAF Women’s European Championships. In 2017, Kuusinen also played in the IFAF Women’s World Championships in Langley, Canada, where the Finnish national team took fifth place.

With the Helsinki Wolverines, Kuusinen has won back-to-back Maple Cups in 2018 and 2019, and she was named the Most Valuable Player in both league championship games. She also has a silver medal from her time with the Seinäjoki Crocodiles (2013). On top of it all, Tytti holds all the Maple League’s individual records for running backs.

A dream of playing in the USA

After last autumn’s championship party, Kuusinen revealed her desire to play football in the United States. Here’s how Tytti recalls the process:

My biggest goal for the coming season is to challenge and develop myself as an athlete and American football player in the sport’s home country. I set out to explore opportunities in the U.S. last fall after the season ended. I contacted a few teams and gathered information and shared a highlight video with them about my career so far. After much consideration, I chose Boston because I saw the best potential for development there and I was left with a good impression of the team.

I left for the U.S. in early March to prepare for my first season in the Women’s Football Alliance (WFA) along with my new team, the Boston Renegades, whose goal this season is to win an historic third consecutive national championship. The season was scheduled to begin in early April, but the start has been postponed until early May because of the COVID-19 mitigation efforts.

Tytti still aims to play in Boston this summer, if the Coronavirus epidemic eases and play commences. She also plans to play for the Helsinki Wolverines in the fall.

Following the end of the WFA season, I hope to participate as a member of the Helsinki Wolverines in the international Transatlantic Trophy II tournament, which will be held at the beginning of September in New York. For the tournament, the plans and schedule are still valid for the time being.

How did workouts start in Boston and how do you train now?

The reception from the team was the friendliest, and I quickly felt at home in Boston! I also got to travel with the team right away, on my first weekend, to participate in a joint training camp with the Baltimore Nighthawks. It was great to immediately train and scrimmage in that atmosphere and internalize the play book in real time situations — and of course meet new teammates. The training was already game-focused near the beginning of the season, and there was also a lot of focus on special teams.

Then came the Coronavirus

Shortly after Finland began measures and restrictions to battle the spread of the Coronavirus, so too did the city of Boston, and more broadly the state of Massachusetts, which also forced many cancellations including the first few games of our season. Now the Renegades’ preparations for the season continue remotely in virtual classrooms, so [on March 27] I returned home to Finland to monitor the fate of our season and wait for the situation to pass.

In addition to remote learning, I’ve done body weight exercises at home, running and hurdles, and speed and coordination drills specific to my position. This has also been a good time to focus on basic fitness training, which is often given less attention due to strength and sport-specific training. I have to admit that access to a gym and weight room are sorely missed, in addition to practice sessions with my teammates!

Community is important during lockdown and quarantine!

While there are no face-to-face gatherings and exercises now, I feel that it is still important to maintain community in one way or another so that no one is left feeling isolated and alone. But this item is of paramount importance: to respect the prevailing instructions and regulations issued by the authorities. The situation is not easy for any of us as individuals or communities, but simply, we can help by staying at home.

And what is your personal situation since returning from the United States?

I am completing a prescribed 14-day post-travel quarantine. My day job has shifted completely to telecommuting.

Kuusinen has faith that sports will resume and that American football will be played this year.

One of the values ​​of our community is determination! I believe and hope that in one way or another there will be meaningful football this season. Hold your head up, keep the faith, and stay ready — adapt to any situation that comes your way! As athletes we now need more tenacity, guts, and creativity. 😉