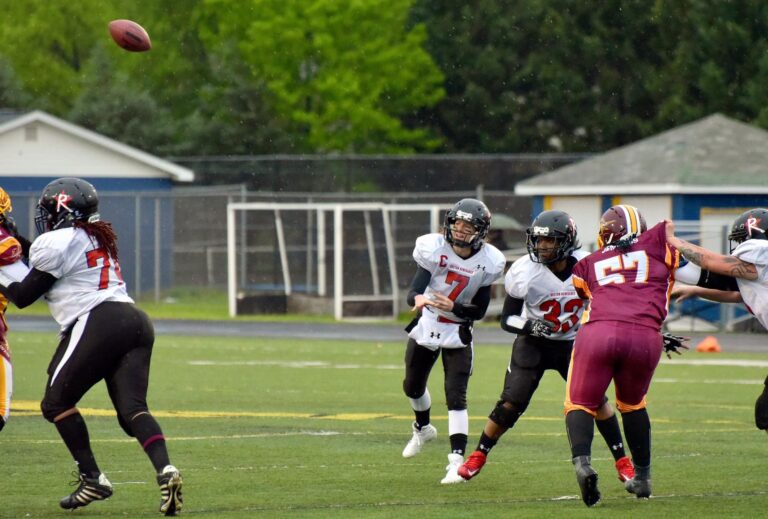 The contest started as well as Boston could hope for. The Renegades received the opening kickoff and they proceeded downfield. Their 81-yard drive was finished by a 10-yard touchdown reception by Beinecke. Brooke Goodman #97’s PAT was good, and Boston lead 7-0 after taking about 4-and-a-half minutes off the clock.

But their opponent responded quickly. Only 15 seconds later, Divas running back Whitney Simms put D.C. on the scoreboard with a 48-yard rush to the end zone. A successful PAT knotted the game at 7 apiece.

Despite the quick starts, yardage and points became harder to come by for both offenses. The teams traded stalled drives until the middle of the second quarter when D’Ajah Scott of the Divas returned an interception of Cahill to Boston’s 18 yard line. Simms eventually punched it in, giving D.C. a lead 13-7, as the PAT failed.

The teams traded a few more possessions before Boston struck back near the end of the half. Again it was Beinecke who found pay dirt, this time on an 18-yard reception. The ensuing extra-point kick failed, and the teams took a 13-13 tie into halftime.

Both teams continued to struggle on offense in the second half. After several back-and-forth possessions, Boston’s Adrienne Smith was able to make a big play on special teams, returning a D.C. punt for a touchdown at 3:46 in the third quarter to take a lead 20-13.

On the following drive, Vicky Eddy intercepted Divas quarterback Kendra Bates at D.C.’s 37. At the close of the quarter, the Renegades were in the red zone poised to extend their lead. However, Boston was not able to convert; a fourth-down pass attempt into the end zone was knocked down by a Divas defender.

D.C. was able to reestablish field position on their next possession, and were in good starting position at Boston’s 40 following a short punt. With 2:03 remaining, Divas wide receiver Kentrina Wilson grabbed a 7-yard touchdown pass from quarterback Amanda Congialdi. A successful PAT tied up the game 20-20, and that is how regulation ended.

With NCAA overtime rules in effect, the Divas won the coin toss and elected to play defense first, with the Renegades starting at D.C.’s 25. Whitney Zelee soon scored on a nine-yard rush to put Boston ahead by 6. In an extraordinary turn of events, D.C. defender Safi Mojidi recovered a fumble on the extra point attempt and returned it for a defensive two-point conversion, cutting Boston’s lead to just 4, positioning the Divas to win with an end-zone score on their following possession.

The Divas drove as far as the 6 yard line but were faced with a fourth-and-1 to keep the game going. On the play, Renegades linebacker Vicky Eddy #45 dropped D.C. Divas running back Okiima Pickett for a loss to secure Boston’s victory in overtime, 26-22. The win marks Boston’s first victory over their archrivals since 2014, handing D.C. their first loss in over a year.

With the victory, linewoman Shana Segers #64 reached a milestone of 100 victories earned on the gridiron. Starting with the New Orleans Spice in 2003, Segers played seven seasons with the New York Sharks and three seasons with the Boston Militia before joining the Renegades. She joins Amy Saur, Vicky Eddy, Jennifer Olivieri, and Allison Cahill as a member of Boston Women’s Football’s “100 Club”.

The Renegades will enjoy a three-game homestand beginning Saturday, April 29 when they face the Montreal Blitz.