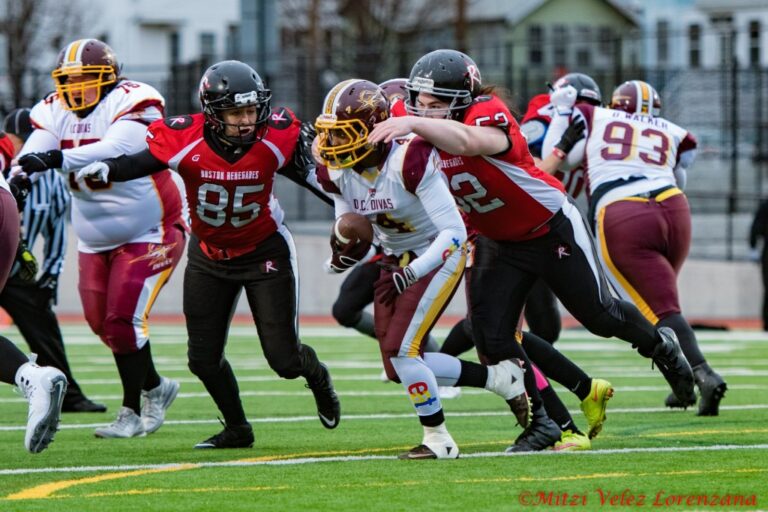 By Andy Arnold, WFAprofootball.com
WASHINGTON, D.C. — July 12, 2018 — Move over Redskins-Cowboys , Chiefs-Raiders, and Alabama-Auburn. There is another football rivalry that equals anything you guys bring.

This other matchup is between the D.C. Divas and the Boston Renegades and is arguably the best rivalry in the history of women’s football. The two teams are set to battle for the Women’s Football Alliance National Conference Championship on Saturday, July 14, at 6 p.m. at the Prince George’s Sports and Learning Complex.

“The Boston-D.C. rivalry is a great one,” Renegades quarterback Allison Cahill said. “We’ve been battling it out for over a decade now. It’s an awesome rivalry not only for the two teams involved, but for the league and our sport as well.”

The winner of Saturday’s game will compete for the WFA National Championship in Atlanta on July 28th against the winner of Los Angeles Warriors/Kansas City Titans game, which is being played this weekend in Independence, MO.

“The stakes are always high, and this weekend is no different,” Cahill added.

The Divas split two close games with the Renegades during this year’s two regular season games. The last time that happened, in 2011, Boston went on to win the National Championship. Boston won another championship, in 2014, before the Divas then went on to win back-to-back titles, in 2015 and 2016.

However, digging further back in the annals, it becomes evident that the Boston/D.C. matchups were more of an emotional rivalry. Before the teams split games in 2011, Boston had won 11 straight games against the Divas and, as formative as those losses were for the Divas, they took a toll.

“Those losses were excruciating,” said D.C.’s offensive coordinator Allyson Hamlin, who was also the team’s quarterback during those years. “But but I’m so thankful for how the losses against them shaped us, because it made all the wins worth it.”

This year, each team won at home by a touchdown or less. The Renegades defeated the Divas, 21-14, in the season’s first matchup, and the Divas answered in May, defeating the Renegades 40-35.

“I feel they wanted it a little more than us,” Washington quarterback Amanda Congialdi said of that first game. “We got a little content being up 14 points which was obviously an error on our part. I think we learned from that game tremendously.”

Indeed, Cahill and Emily Beinecke made mincemeat of the Washington defense in the Divas’ season opener. The pair connected 11 times for 187 yards and a touchdown. They also set up a couple of short touchdowns runs for Angelica Pascual. The Renegades defense stopped Washington cold.

In the second game, Boston took an early 21-point lead before the Divas rallied.

“Losing to them by seven points gave us confidence that we can play with the best teams in the league,” Congaldi said about what they learned from the season’s first matchup.

And that confidence paid off.

The Divas’ Hamlin opened up the offense in the second game, calling plays that allowed the quarterback to run more. In all, Congialdi accounted for close to 260 yards total offense. D’Ajah Scott also found some holes picking up 84 yards on the ground.

In the National Conference semifinals, Boston’s Cahill threw five touchdown passes against Pittsburgh and Angelica Pascual ran for 200 yards and four scores when the Renegades topped the Passion 63-26.

And the Divas’ D’Ajah Scott Day scampered for 251 yards and four touchdowns on just nine carries in the 56-0 victory over the Atlanta Phoenix to advance. The shutout represented the 60th shutout in team history.

Although Pascual has found pay dirt three times against the Divas this season, she’s gained only 151 yards on 47 carries in previous meetings. Fans can look for the D.C. defense to neutralize Pascual and to also put pressure on Cahill, the top-rated passer in the WFA.

“If they’re running, they are not throwing,” said veteran Divas’ linebacker Trigger McNair.

With all the history that exists between the two teams, there is also a tremendous amount of mutual respect. The rivalry has pushed each organization to develop and transform into the teams they are today.