Most athletes would consider themselves fortunate to play on one national championship team in their lifetime.

“I feel that for all the input we did, the only output would have been a championship,” said Beinecke, a wide receiver, who has earned All-America honors three times in her four years with the Renegades. “It was similar to in softball, where we made it to the College World Series but didn’t win when I was a junior, but we came back and won when I was a senior. Here, last lost to Dallas in the finals a year ago.

“I’m lucky to play with such as experienced, talented group of athletes.”

“We spent a lot of time on the fundamentals,” she said. “I worked on the basic routes over and over again, like when I was a shortstop and spent a lot of time working on fielding ground balls. We paid attention to all the little details and it made a big difference. Both teams also had a lot of fun and that was a big part of it.”

The Renegades finished the regular season with a 7-2 record. To get to the championship game, they had to play the quarterfinals and semifinals on the road, against the Pittsburgh Passion and the DC Divas.

In the regular season, Boston lost road games to each team, but in the playoffs, the Renegades won in Pittsburgh, 63-26, and DC, 34-32.

“We felt like we had nothing to lose,” Beinecke said. “Playing in the heat, we were also in better condition and felt we could outlast them. We had a fair number of people go both ways.”

Though Beinecke usually just played on offense, she did line up at defensive back at times in the quarterfinal at Pittsburgh.

“They had a tall receiver and they needed someone to jam her,” Beinecke said.

Against DC, Beinecke scored what proved to be the winning touchdown.

“It was with about six minutes left,” she said. “Our defense played great. DC scored late and went for two to tie, but we stopped them.”

In the regular season, Beinecke ranked among the top five in the league in receptions and receiving yards. She was one of 10 Renegades to earn All-America honors.

“There were others on the team who could have gotten it, too,” Beinecke said. “It matter more to me to get a ring along with everyone else. When you get older you appreciate how important it is to be a good person and good teammate.” 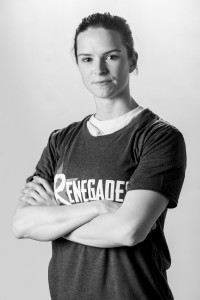 At Concord-Carlisle, Beinecke played soccer, basketball and softball. She was a Dual County League all star in all three sports and one of the top goalkeepers in the DCL in soccer. In softball, she was a league MVP.

The coaches at Concord-Carlisle, she said, helped prepare her for the success she enjoyed at Tufts and with the Renegades.

″[Softball coach] Lisa McGloin was very inspirational,” said Beinecke, who now lives in East Cambridge. “Nancy Slocum pushed me to explore chances to play soccer in college even though I ended up playing softball. They were great people, as were Cheyl Milligan at Tufts and with the Renegades, head coach John Johnson and offensive coordinator Vernon Crawford.

The high standards McGloin has for her Concord-Carlisle softball players helped Beinecke rise to meet the expectations with the Jumbos and Renegades.

“With the Renegades, the coaches have progress reports with each individual player,” she said. “We go over what we do well and where we can improve and we set goals.”

Beinecke’s full-time job as a strength coach at Achieve Fitness in Somerville has helped keep her in condition to withstand the demands of the football season. She also trains four of her teammates at Achieve Fitness.

“It helps us get better together,” she said.

At 27, Beinecke is not sure how much longer she wants to keep playing. She plans on taking it year to year, but has no plans to hanging up the pads anytime soon.

“I definitely want to play next year,” she said.