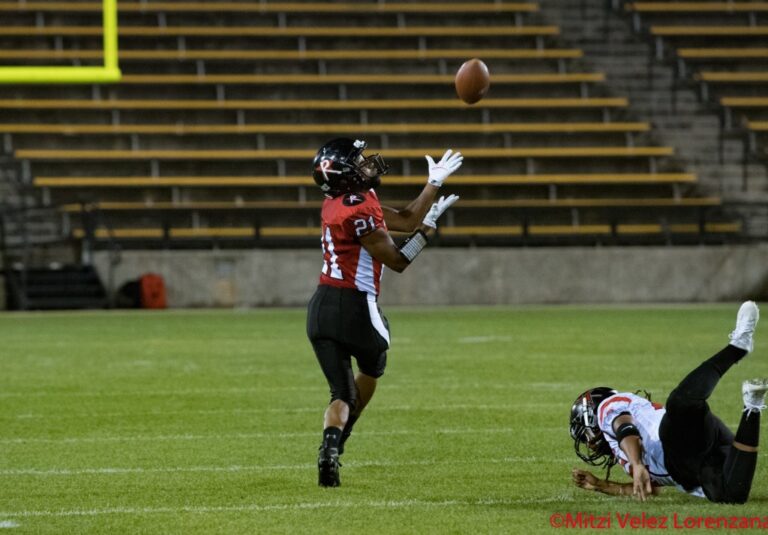 Brockton’s Chante Bonds is a hit in football (Brockton Enterprise)

By Jim Fenton | The Brockton Enterprise

AUGUST 29, 2018 — The one-time basketball standout was recently named the player of the year in the Women’s Football Alliance and earned the most valuable player award in the championship game won by the Boston Renegades.

She began playing football as a fourth-grader at the former Winthrop School on the north side of Brockton.

“My classmates and I would have a football season,″ recalled Chanté Bonds. “We’d play football before the bell rang in the morning, then we’d have a second game at recess. Halfway through the school year, we’d make trades. Football is something I always wanted to do.″

Basketball, however, is the sport where Bonds made her name in Brockton.

The point guard played a key role in the Boxers girls team winning the state championship in 2001, then helped Bentley University go 104-28 during a college career that included a trip to the NCAA Division 2 Final Four in 2003.

But football has been back in Bonds’ life, too, ever since she started playing for the New York Sharks a decade ago while coaching at Fairleigh Dickinson.

At the age of 35, Bonds is still going strong in the sport that she started playing while in fourth grade in Brockton during the early 1990s.

Bonds, in her fifth year with the Boston Renegades, was recently named the player of the year in the Women’s Football Alliance, then earned most valuable player honors in the Division 1 national championship game when the Renegades defeated the Los Angeles Warriors, 42-18, in Georgia on July 28.

One year after being selected the WFA’s defensive player of the year from the cornerback and safety positions, Bonds was an offensive sparkplug for the Renegades as a running back and wide receiver and made the all-league team at cornerback.

“I’ve never been about personal accolades,″ said Bonds. “Whatever I can do to help the team, that’s what is important. The things that come after, it feels good and it’s nice, but none of that means anything to me if we didn’t win that championship game. That was the goal.″

Bonds helped put the Renegades on top in the title game by catching five passes for 162 yards. Two of the receptions went for touchdowns, including one that covered 73 yards, and she returned a punt for another score.

It was the capper of a sensational season for Bonds, who has earned all-league honors seven times while playing for the former Boston Militia and the Renegades.

“I thought I came in really focused this season,″ said Bonds. “I felt like the coaches did a really good job putting me in places where I could be successful on the field. I played more offense this year. They needed me to fill a void on offense.

“It was an awesome, awesome year. I’m so proud of my team. We were undefeated last year, but then lost in the championship game (to the Dallas Elite).″

The WFA, which was formed in 2009, is one of three women’s football leagues in the country with an 11-vs.-11, full-contact format. The league has nearly 70 teams that participate in three divisions from coast to coast, and the Renegades play their home games in Revere.

Bonds, one of the oldest players in the league, has watched the WFA develop through the years to the point where last month’s Boston-Los Angeles title game was streamed lived on ESPN3.

“Back when I started, I was thinking there’s women’s league and we had a good time playing,″ said Bonds. “Now, to have the championship game streamed on ESPN3, more and more people are hearing about it.

“To have so many women’s teams in different parts of the country, I love it. I want to have it get to the level where it’s on ESPN, not ESPN3. As women, we’re starting to break barriers. You have assistant coaches in the NFL now who are women.

“I never really imagined (years ago) that I’d be playing at this level with a bunch of talented women. I thought maybe I’d have to play co-ed or something like that. It’s been great.″

Bonds, who has worked for three years on the staff at the Boston Day and Evening Academy for underprivileged youth, isn’t sure how much longer she’ll be playing football.

“That’s a good question,″ she said. “We all work full-time jobs and trying to play the sport at the same time. If I was getting paid, I’d play until my body can’t take any more hits, but that’s not the case. I’ve got to stay healthy and work full time. I don’t have a definite answer, maybe I’ll play a couple more years. I just love it.″

The 2001 Brockton High graduate is enjoying the opportunity to take part in sports 13 years after ending her basketball career at Bentley where she appeared in 131 games.

“I kind of joke about this, but it’s pretty true,″ said Bonds. “I just feel like I’m addicted to playing sports. I just love pushing my limits to see what I can do. It’s always been part of my life. I was pretty good at basketball and was blessed to get a scholarship to Bentley and now this.

“I was always a pretty aggressive player in basketball. I liked contact. One of my favorite things to do when I was playing basketball was setting screens on people. It was in my nature, that physical play. I feel like I had the right mentality to play football. Now I’m able to hit people with pads on.″

Seventeen years after bring a state basketball title to Brockton as a member of coach Pat Brennan’s Boxers, Bonds has delivered a national football crown to Massachusetts.

“Winning the state championship was the first time I cried for happiness,″ said Bonds. “Going to the Final Four with Bentley was such a great experience.

“This year, winning the championship in football, it’s such a great feeling. You put in so much hard work and to actually win a title, it just feels amazing.″