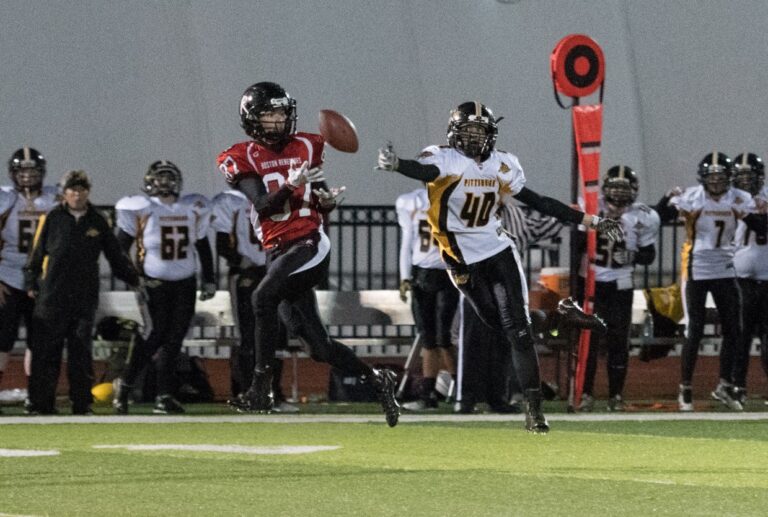 BOSTON — A fumble recovery by Renegades defensive end Brooke Goodman #97 in the final minute of a rainy fourth quarter sealed a come-from-behind victory over the visiting Pittsburgh Passion, 33-28. Wide receiver Emily Beinecke #87 scored the game winner — a 55-yard reception from quarterback Allison Cahill #7 — with just 1:00 remaining, and running back Stacey Tiamfook #28 scored three rushing touchdowns and a two-point conversion to pace Boston’s offense. Cahill also chipped in a rushing touchdown. The previously undefeated Passion fell to 5-1 while Boston improved its record to 5-0.

The Renegades offense were quick to start after receiving the opening kickoff. Cahill connected with Kathryn Tylander #15 for a 29-yard strike on the first play from scrimmage to reach Pittsburgh’s 27 yard line. Two plays later they converted a 3rd-and-8 with a 16-yard reception by Adrienne Smith #10 to put Boston in the red zone. Tylander reeled in another Cahill pass marked at the 1, and Tiamfook finished the drive rushing up the middle untouched for the touchdown. Goodman successfully converted the extra point kick.

Pittsburgh, with some timely play conversions and help from a penalty, was able to drive to Boston’s 18-yard line. But the Renegades defense stiffened, chasing down Passion quarterback Janice Masters #3 for a short gain on third and 10, and reclaiming possession on downs after Masters’s failed pass attempt on fourth down.

Boston then methodically moved the chains with short, gashing passes to Smith, Tylander, and Beinecke, and slashing rushes by Tiamfook, who again scored from just outside the goal line to open up a quick 13-0 lead.

On their second possession, the Passion were quickly faced with a fourth-and-four at midfield due to stifling play by Boston’s defensive line of Goodman, Laura Pula #72, and Erin Diette #30. Pittsburgh’s Angela Baker #82 converted on a pass from Masters and the Passion drive continued into the second quarter, when they began to lean on their running game. Five consecutive rushes and one pass play put the Passion at the 2 with a first-and-goal. When the Renegades turned away Pittsburgh rushers three straight times, Masters targeted receiver Lisa Horton #14 for a pass in the end zone closing the gap 13-6.

After trading a scoreless possessions, Boston leaned on its own rushing attack to chew up clock and complete an 87-yard drive. Tiamfook gained 71 yards on six carries in the series, and Smith rushed for 12. Cahill carried twice for nine yards including a five-yard rush to the pylon. A two-point conversion by Tiamfook made the score 21-6 with only seven seconds remaining in the half. Undeterred, Pittsburgh returned the kickoff out of bounds at midfield with enough time for one play. Masters completed a short pass to Horton who the pitched a lateral to Gabrielle O’Neil #26 who had a clear path along the sideline, crossing the goal line with time expired. Boston regrouped to stop a two-point conversion and go into halftime leading 21-12.

The Passion returned from the break carrying the momentum of their finish of the first half. After safely recovering an onside kick attempt, Pittsburgh running back O’Neil struck again, this time with a 55-yard dash to the end zone. After a two-point conversion reception by Baker, the Passion were only one point down, 21-20, fifteen seconds into the third quarter.

The Renegades next went three-and-out at their own 41, and punted for no gain. While Pittsburgh started with excellent field position, they were stymied by Boston’s defense save one 21-yard pass completion to Baker. After eight plays they turned the ball over on downs at the 20 yard line. Boston could get no further than midfield, where Pittsburgh took over on downs and mounted another scoring drive on the legs of their running game. Tara Catone #25 ripped a 42-yard gain to the nine, and following carries by O’Neil and Kia Foster #34, Masters crossed the stripe herself to put the Passion ahead. A successful two-point conversion by O’Neil gave Pittsburgh a 7 point advantage 28-21 with 1:37 remaining in the quarter.

With momentum now in the visiting team’s favor, the Renegades needed to keep Pittsburgh’s offense on the sidelines with a scoring drive. Boston’s next three plays netted only 4 yards, but on fourth down the Renegades’ drive was kept alive by a holding penalty. Now the final frame, Pittsburgh would have had Boston facing another fourth down situation if not for a personal foul penalty against Chelsea Zahn #20 whose late hit on the quarterback put the Renegades inside the red zone. After a key 14-yard reception by rookie receiver Lauren Yung #8, Tiamfook scored from one yard out. The kick attempt was missed, however, and Boston continued to trail, 28-27, with 10:40 remaining.

Boston forced a turnover on downs at their own 36, but the Passion next collected the only interception of the game at midfield. The weather grew ominous as the breeze stiffened and a cold drizzle began to swirl. The Renegades defense again rose to the occasion, overwhelming Pittsburgh’s offensive line to regain the ball on downs. Pittsburgh returned the favor, getting the ball back in four plays. Still, they could not advance. With time now waning under two minutes, the Passion decided to gain field position by punting away.

As Boston took over at their own 25 yard line, the drizzle intensified to a light rain. Smith made a key 16-yard gain to convert on third down. She also grabbed a short gain on the next play, but had to come out of the game following an injury timeout. Though their top receiver was sidelined, the Renegades found the big play they had been looking for all night long: a 55-yard touchdown strike to Beinecke. Having shaken off defender Krystal Cozzo #40 in single coverage, the third-year receiver nearly had the wet football slip from her grasp on the reception, but she secured the ball while eluding two would-be tacklers, much to the excitement of the crowd braving the wet, cold weather.

With exactly one minute remaining, Boston’s defense took the field to protect a 33-28 lead. Masters connected with Baker immediately for a 20 yard gain into Renegades territory. Masters went deep again on the the next play, but Renegades game day captain, cornerback Briannah Gallo #24, spectacularly batted down the pass intended for Peyton Heib #88. Two plays later, Boston’s defense again burst past Pittsburgh’s offensive line, pressuring Masters as she rolled out of the pocket. In readying to pass, Masters lost grip of the ball, and the fumble was recovered by Goodman to preserve the victory for Boston.

The Renegades moved to 5-0 on the season, and face the undefeated Chicago Force on Saturday May, 20 in Chicago. Boston’s next home game at O’Connor Stadium will be June 3 against the Philadelphia Phantomz.