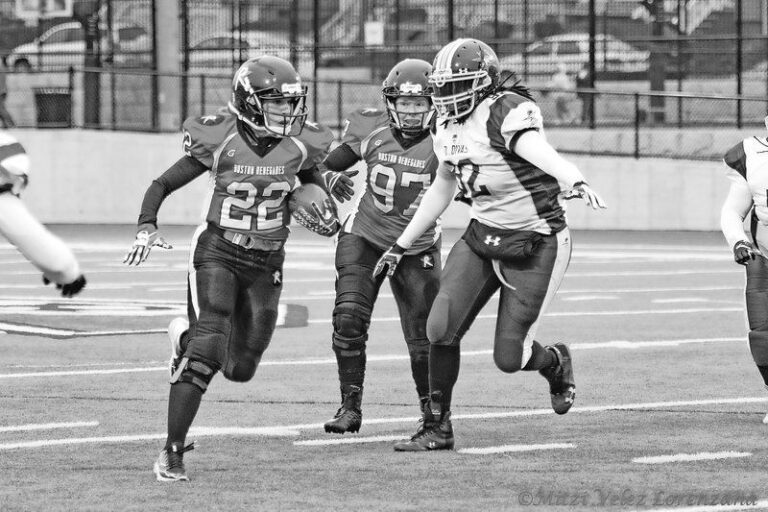 Competing for a national championship is difficult enough. Doing it in a sport you didn’t pick up until adulthood is even more challenging.

That’s the task Sue Sheldon has faced, and will again on Saturday as the Boston Renegades seek a Women’s Football Alliance title.

“We’ve accomplished what we wanted, which is getting back to the championship,” said the reserve running back. “We were there last year and lost. So we accomplished a goal in that regard, but we have one more step to go.”

The Renegades, who play in the top division of the WFA, are in the title game for the second season in a row.

Sheldon played field hockey, basketball, and softball at Georgetown High School (Class of 1991), earning Eagle-Tribune All-Star honors in all three as a senior.

She has run Boston Marathons, too, but she didn’t start in football until 15 years ago.

“The all-around athleticism can translate skills into football,” said Sheldon, a 5-6 running back who now calls Middleton home. “Football is such a unique sport. As long as you’re an athlete you can play. Girls don’t usually grow up playing football. It’s starting to change now, but we’re coming into football having played all these different sports.”

Her football career began with the ill-fated New England Storm in 2003, and after taking some time off, she found a home with the Renegades.

“I always loved the sport of football,” said Sheldon, a Northeastern graduate who works as a police dispatcher. “Growing up as a kid, I would have loved to have played. But women and girls didn’t play back then. When I got older, I read in the newspaper about a women’s tackle football team and I tried out and fell in love with playing.”

“Sometimes it takes a bit to get caught up to speed and play at the caliber you need to play at,” she said. “Anybody who is a really good athlete can catch on.”

So far, it’s been a recipe for success for the Renegades, whose players range from seasoned veterans to many having just recently picked up the sport.

Boston will face the Los Angeles Warriors on Saturday (7 p.m.) at Georgia’s Kennesaw State University for the national title. Sheldon is confident in what the group can do.

“I know it’s cliche, but we really need to just do our jobs,” said Sheldon. “All our players need to do their job that we’ve been practicing. No matter the position, we all have a unique job to do. If we come out and just play a full game of what we are capable of and have been practicing, we’ll be OK.”