Female athletes are invited to learn basic concepts of 11-player football and engage in physical skills training. Attendees can expect to participate in non-contact drills to develop general and position-specific abilities like footwork, route running, ball handling, and more.

In addition to being an opportunity for women to learn the mechanics of football, the offseason training activities (OTAs) double as scouting sessions for the upcoming season which begins in April 2022. 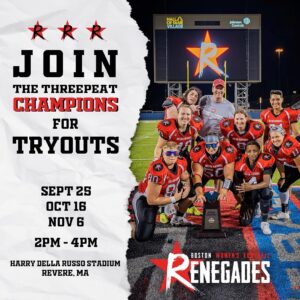 “This is a great opportunity for those interested in joining the team to get a feel for how a practice is run, and meet some of the staff and returning players,” said General Manager Benjamin Brown. They are up-tempo practices focusing on individual skills. They are non-contact; no helmets or pads are necessary.”

“Previous playing experience is NOT a prerequisite to participate,” emphasized team owner Molly Goodwin. “The sport of football requires diversity, and to be successful we need players of all shapes, sizes, skill sets, and backgrounds. You might have been a high school or college athlete, maybe you’re a gym rat, or maybe you have never played organized sports before. Bring a desire to play and a commitment to excellence and we will shape you into competitive a football player.”

Those hoping to join the team are encouraged to attend all three OTAs in advance of regular team practices which begin in January. The Renegades’ football season runs from April through July. The Renegades will seek their fourth consecutive league title in 2022. To request information about participating in the OTAs and joining the team, visit bostonrenegadesfootball.org/join.

About the Women’s Football Alliance
The Women’s Football Alliance (WFA) is a full-contact Women’s American football league that began play in 2009. The league is comprised of over 60 teams across three divisions and in 32 states. As the largest women’s football league in the world, the WFA’s mission is to grow the sport and highlight the best women’s football players. Headquartered in Exeter, California, the league is currently owned and operated by Lisa and Jeff King.