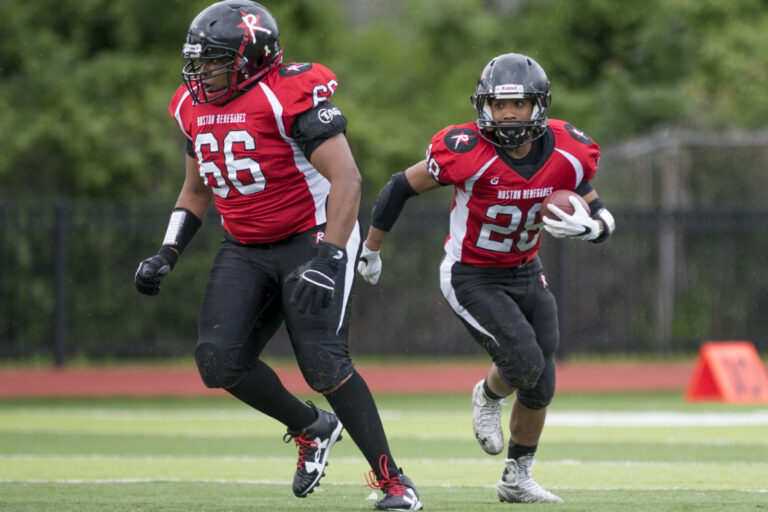 It wasn’t a storybook ending, but a pair of Barnstable High School graduates got a chance to play on their sport’s biggest stage.

Not bad for two women, Steph Jeffers ’03 and Marcia Beatty ’04, who at one time thought they might never get a chance to play football.

“Sometimes you get the look from people that’s like, ‘You play women’s football? Women can’t play football.’ So I guess you’re overstepping that stereotype,” said Beatty, who plays with Jeffers for the Boston Renegades of the Women’s Football Alliance, one of three full-contact women’s football leagues in the country.

Along with coaching assistance from former New England Patriots Patrick Pass and Vernon Crawford, the previously-unbeaten Renegades earned a spot in the WFA Division I national championship but fell to the undefeated Dallas Elite, 31-21, this past Saturday at Highmark Stadium in Pittsburgh.

The Renegades fell into a 31-0 hole in the first half and surged to score 21 unanswered points, but it wasn’t enough for a Patriots-like comeback mirroring Super Bowl LI.

“We had a gameplan, we thought it was enough, and we just fell short of executing,” Jeffers said. “It showed they wanted it more than we did.

“It was a good season,” she continued. “A lot of people wish they were able to be in our position. I have strong faith enough in the Boston Renegades that we’ll be able to bounce back.”

Jeffers and Beatty weren’t high school teammates, but they both played a part in getting Boston’s women’s football team into a league final for the first time since 2014.

“Both of them have been instrumental in helping us get better,” Renegades head coach John Johnson said of Beatty and Jeffers. “The ladies have just embraced the process of being prepared and understanding what it was going to take to get back to the level this team used to play at years ago.”

Jeffers, listed at 5-feet, 11 inches and 270 pounds, played quite a bit of football this past month. Not only did she help the Renegades average over 350 yards and 32 points per game as a standout guard, she earned a gold medal with Team USA, which captured the IFAF Women’s World Championship with a 41-16 victory over host Canada.

Jeffers was one of 45 selected, out of 200 who tried out, and played three games in Langley, British Columbia, from June 24-30.

“It’s amazing to know that I was able to be there,” Jeffers said. “You learn to fall in love with the sport that’s just constantly evolving. This sport is getting better, it’s getting stronger, and I’m happy to be part of it.”

Track and field helped Jeffers earn a full scholarship as she holds Barnstable’s girls outdoor shot put and discus records. She started college at Jacksonville University and then transferred and graduated from NCAA Division I Tulsa University.

Jeffers said she’s always been interested in football, but in high school she said she was never approached by anybody to play.

“I was really challenged on lifting and the quality of being explosive,” she said. “A lot of throwers workouts are similar to football. I always wanted to do football, but I couldn’t do it because I was on full scholarship.”

After graduating from Tulsa, she moved to Columbus, Ohio, with her uncle, who worked in construction and found Jeffers a job. There she also found the Columbus Comets, a semi-pro women’s tackle football team, and immediately stood out, winning First Team honors in 2010 and 2011.

Shortly after, she moved to Dorchester and joined up with the local franchise, then known as the Boston Militia, which was previously owned by Ernie Boch Jr. The team won three championships between 2008-2015, but after the Militia folded in 2015, owner Molly Goodwin reorganized and renamed the team.

“It was really amazing to see across the states the different types of strong athletic builds some of these women have,” Jeffers said.

Football is newer to Beatty, now a Quincy resident. A former soccer, basketball and softball standout at Barnstable and D-III UMass Boston, Beatty said she never imagined playing tackle football while growing up in Marstons Mills.

“I was tiny. I figured I was too small to play football,” said Beatty, who earned a degree in exercise physiology and now works for Rockland Public Schools. “I’ve always watched football, but I never really paid attention.”

Beatty, listed at 5-2 on the roster, tried out for Boston in fall 2015 and then began training camp in January. In her second season, Beatty had 14 tackles and an interception as a defensive back, and she was the team’s backup kicker and a key fixture on special teams.

“Learning the defense second year in is definitely easier,” she said. “I feel I can understand what they’re saying and know more of the schemes behind it.”

Crawford is the Renegades’ offensive coordinator and head football coach at Seekonk High School, but he has taken notice of Beatty’s headstrong attitude.

“You knew she was tough, and that eventually it was going to show on the field,” Crawford said.

The cost of playing

Playing for the Renegades and Team USA, Jeffers had to sacrifice more than just money. In addition to practicing two-to-three times per week with film sessions and a $700 per season fee, Renegades players have to cover their own transportation to away games, with meals and lodging being provided.

Jeffers also had to temporarily walk away from her job as a union electrician to join Team USA.
Though Beatty and Jeffers said they’ll likely never be paid for playing football, they hope that will change as more women become interested in playing.

“Hopefully it will get to the point where maybe one day instead of having to pay to play all this, maybe you could get paid,” Beatty said.

Through it all, though, Jeffers and Beatty agreed that they’re taking their football careers one step at a time, but both seem to understand that their full-times jobs take precedence.

“I want to tap into my trade and get better at it,” Jeffers said. “I can play again, but it just takes up a lot. If it was up to me, I’d go until I can’t go anymore.”

(Click here to read a pdf of the article as it appeared on capecodtimes.com)