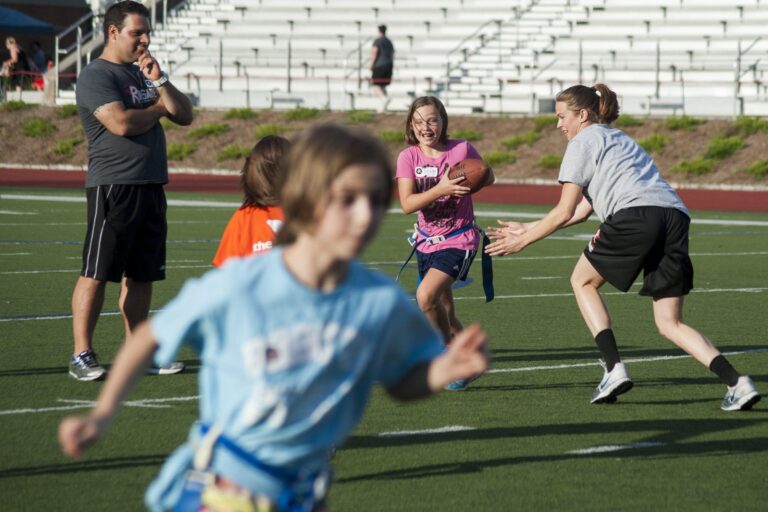 After playoffs, Renegades look ahead to future of women’s football (Somerville Journal)

By Sam Goresh, Wicked Local staff. Skylar Garcia, 10, runs with the ball in a flag football game as Boston Renegades player Emily Beinecke plays defense during a football clinic for young girls at Dilboy Stadium on July 22. Garcia’s mother, Deirdre Hiort, is a linebacker for the Renegades. (Wicked Local Staff photo/Sam Goresh)
SOMERVILLE, Mass. — July 31, 2015 — The Boston Renegades’ season ended two weeks ago, but players still took the field at Dilboy Stadium for drills last Thursday. They went through warm-ups before working on tackling, throwing and agility with their charges – 20 girls between 5 and 14 years old.

Specifics of the practice will fade over time, Renegades rookie Emily Beinecke said. But she hopes seeing professional women’s football players will encourage younger players to keep the sport alive in the area and eventually let it thrive.

“They won’t remember the advice that you give, but they will remember your attitude,” Beinecke told the Journal.

The Renegades hosted the all-girls clinic on July 23 with Somerville Pop Warner and the city recreation department. The Renegades intended to follow up the clinic with a practice as they moved through the playoffs, but their season was cut short by a loss to the Chicago Force at Dilboy the previous weekend.

The team is looking beyond this season, though. They intend to hold more clinics like this with the intent of promoting football as an option to people like Beinecke’s younger self, who played football for a year when she was 13 but ultimately focused on baseball and softball in college before returning to the sport. While women’s football is draining both on and off the field, the Renegades didn’t fight their way back from the dead this year to see the sport slowly die.

“It’s a working women’s league,” said Renegades head coach Donnie Williams of the Women’s Football Alliance, the largest women’s football league. Players for the Renegades travel to practices from as far as New York and New Jersey for a chance to play a competitive level of tackle football.

Renegades players and staff all have jobs and lives outside of football. But that, according to linebacker Jessica Penta, is what makes it all the more special.

“People want to be there…they’re happier to be there,” she told the Journal.

Penta, who works for Jet Blue Airways, will wake up for work at three in the morning after being at practice until ten the night before. But football is too much a part of her life for her to let work get in the way. She grew up with four brothers, playing football with two of them while she was in middle school. She was still in college when her mother showed her an advertisement in the newspaper inviting people to try out for a local women’s football team, the [Bay State] Warriors, who eventually merged with the Boston Militia.

“When I got into football it completed me,” Penta said “It was what I was looking for after collegiate sports.”

Penta took two years off after six years of playing football but entertained the idea of coming back when she heard that the Militia was rebuilding as the Renegades. Her father, a huge supporter of her football career, encouraged her to play again. Shortly after her decision to join the team, her father got sick and passed away, four weeks after being diagnosed with cancer.

Penta said it was hard because football had been something that she had shared with her father, who she would talk to before and after every game. But she believes that playing and keeping active, as well as being surrounded by some of her best friends, helped her cope with the grief of her sudden loss. Though she’s unsure if she will play another season, she said that no matter what she will stay involved with the team.

After their playoff exit, the Renegades are taking time off. Renegades owners Molly Goodwin and Mia Brickhouse will be heading to the WFA’s owners meetings in Los Angeles after the Super Bowl. They hope to ask the league for a full schedule for next year’s season, with four home and away games each, instead of the truncated schedule of two home games and three away games they received this season.

That schedule was part of why former owner Ernie Boch Jr. discontinued the team, then organized as the Militia. For a few weeks, players were unsure if they would even have a season, let alone an unfavorable schedule. But players and alumni regrouped and reformed as the Renegades.

Now the organization is also holding an external 360-degree review to figure out their strengths and weaknesses as an organization, along with the captains are soliciting feedback from the players, both good and bad. Goodwin said this feedback will help keep things transparent between the leadership and the players, so that the players feel like they have a say in the direction of the team.

After their break they will regroup, in the fall they will start holding monthly workouts as well as tryouts, hoping to recruit more players.

And now they’re planting seeds for the future. According to Somerville Pop Warner safety coach Robert Torino, four of the 125 players in Pop Warner last year were girls. He saw the clinic as a way to show young girls as well as their parents that they can play football.

“Every year we have one or two girls who want to come out and play football but they’re not sure, or they’ve never done it, or they just feel intimidated by playing it,” he told the Journal.

The more girls learn at a young age, the better-prepared they’ll be for women’s football, tight end Emily Weinberg told the Journal. She said that rookies often come to the team as strong athletes, but rarely have an understanding of the game of football. Or they need to readjust – Beinecke said it was at times frustrating to go from being a national champion softball player at Tufts to being a rookie football player.

Weinberg said she hopes that one day rookies will come to WFA teams with both athleticism and knowledge of football which will help elevate the play and shorten the learning curve as older players retire and younger players fill the teams. That’s in the future, though. Despite their dashed playoff hopes, Penta said, the fact that there is a future has given the Renegades a win.

“This season was a success because there is still football in Boston,” she said.