Adrienne Smith’s mission to empower, inspire the next generation of women in football (Patriots.com)

Adrienne Smith cannot be stopped. On the football field, she is a star receiver for the Boston Renegades, a three-time Women’s Football Alliance champion and a two-time International Federation of American Football Women’s World Champion. She’s an entrepreneur, a producer, but more than anything, she’s an advocate, pulling those around her up along with her.

It’s what she sees as her mission, one she will continue as part of the Patriots and Revolution Foundations’ Women in Sports Panel on Thursday.

Unlike others who might look to change the world by creating the support they themselves lacked, Smith is building up others with the encouragement she received from her parents. When her parents noticed Smith glued to the TV during football games or tackling her beloved stuffed animal, Ginger, at the ripe age of three, they knew she had fallen in love.

“People ask me like, ‘Why football?’ I say, ‘Well, why is my favorite color green?'” Smith said.

It just always has been, and despite there being limited outlet for young girls playing football as a child, her parents never discouraged her from pursuing the game she loved. In fact, it was the opposite. Her dad bought her a football for Christmas and taught her how to throw a spiral.

“Even though I was a girl, neither my mom nor my father said, ‘Well, you can’t do this because girls don’t do that.’ If anything was a defining moment, just having parents who supported me regardless, even though the world at the time said that a little girl playing football was crazy,” Smith said. 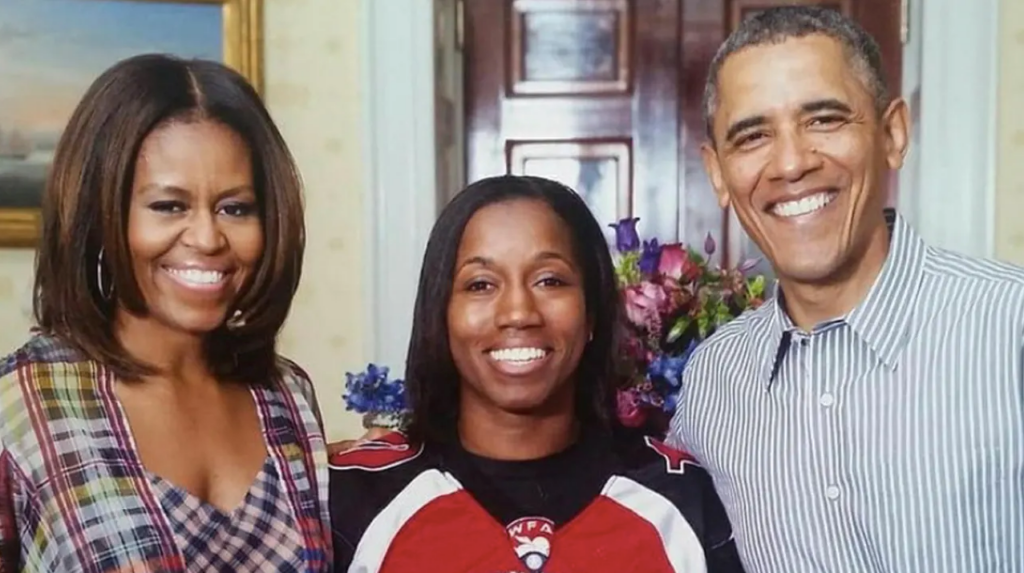 Football wasn’t the only sport in Smith’s life. She played softball and basketball, including several years in Japan. It wasn’t until 2006 that Smith found an avenue to pursue football. She tried out for the New York Sharks, made the team and in her very first play, a punt return, she ran it back for a touchdown.

If that’s not a sign she’s in the right place, what happened after she scored sure is.

“I was in the end zone, I just remember I saw baby Adrienne,” she recalled. “I saw 3-year old Adrienne, and she said, ‘I told you football was your best sport.’ I’ll never forget that.”

Nine years later, Smith became a founding member of the Boston Renegades, formerly the Boston Militia. In the team’s first game under a new name and management, Smith stood ready to receive the kickoff.

And then she muffed it.

“I dropped it,” she said. “I’m panicking, and I just remember there was this calmness. I picked it up, and then it was like Moses parting the Red Sea. I ran that joker back. I ran it back for a touchdown. I scored the first touchdown in the history of the Boston Renegades.”

While it’s hard to sum up Smith’s path in a single anecdote, it might be that one. Even in the face of a mistake or doubt, Smith finds a way through to triumph. That self-assuredness is what has carried her to continually grow and what’s allowed her to persevere, regardless of what anyone else may think.

“For me, my basis is spiritual. I have a strong belief in God. I’m very clear on my purpose in life and why I exist on earth,” Smith said. “Because of that, I just don’t give any weight to anyone denouncing or trying to denigrate that which I’m doing because I know what my purpose is.”

Since she first stepped foot on the football field for her first tackle game in 2005, Smith has been a dominant force in a scheme she considers to be a relative of the Patriots system. With former Patriots players coaching on the Renegades staff, including Vernon Crawford, she is “a granddaughter of the Bill Belichick system.” She started her five-hour commute from New York to Boston in 2011, and hasn’t looked back.

In 2010 and 2013, Smith was part of the IFAF U.S.A. team that crushed opponents on its way to two back-to-back gold medals and advocated for the team to be recognized nationally like any other champion team. The three years between championships were spent writing petitions and making phone calls.

Her persistence paid off. Smith and some teammates were invited to the White House, and the Boston team was invited in 2014.

So, when Smith talks about growing the reach and impact of the game, she means it. She has pushed for herself and her teammates, and now, she is pulling up the next generation behind her.

In 2013, Smith cemented that and launched Gridiron Queendom, a space for women and girls who love football in every facet. It’s for athletes, coaches, fans and everything in between to see themselves in a sport that has often kept them watching from the outside.

The goal, broadly, is to “normalize female football participation,” Smith said, but it’s more than that.

“Moving beyond normalization, which is such just, I feel like, a trite term, but you have to say it because it means what it means,” Smith said. “Really, I want to create shine and pizzazz and just a platform upon which female football players are celebrated and exalted.”

Gridiron Queendom opens the gates and says, yes, you are welcome here. It’s something Smith calls “Emp-iring,” a combination of empowering and inspiring.

There is still a long way to go, but Smith said she considers it part of her journey to help “emp-ire” other women to reach even greater heights.

“It’s a duty, and it’s a duty that I’m proud to carry out because it is important. Representation does matter. It’s my pleasure to be a role model so that when any girl on planet Earth has a desire to play football or wants to do something that society says is outside of her lane, she can look at me. She can look at Sarah. She can look at Jen Welter,” Smith said. “She can look at all the players in the Boston Renegades and know that there is a group of women who decided to step out of what that traditional role had been written for them. They’re successful, and they’re enjoying life, and they are living to their fullest potential.”

On top of that, they are lifting one another up.

While the 2020 WFA season was cancelled due to COVID, Smith said the thing she missed most was her teammates and their camaraderie. In spite of no football season, the Renegades made it a point to stay connected, and in the spring, as the country reckoned with racism and systemic injustices, the team hosted meetings to talk about anti-racism and issues relating to the Black Lives Matter movement.

“That was profound for me because it really let me know that this was a safe space for me, that my teammates, that the organization cared not only about football and winning championships, but they cared about me as an individual and my particular struggles as a Black woman in this country,” Smith said. “I cannot impress upon you or anyone else who reads this article enough how important that was, for the first time in America, I felt seen as a human being. Period. I felt heard. I felt seen. My trials, my concerns, my challenges were no longer just shouldered by me. I now had an entire team helping me move forward.”

That is the power of sports and the power of team, and those who may have felt alienated by sports like football, like there wasn’t a place for them, now can see that it is no longer true thanks to people like Smith.

“If you look at the NFL level, at the highest level, now little girls, teen girls, women can see other women coaching. Wow, there’s a place for me. I actually have somewhere I can go and not just coaching on the field. There are a lot of the employment opportunities in the back offices, as well,” Smith said. “We’re starting to see more women holding prominent positions within the NFL. Then you go to the next level, now we have a collegiate flag football program just for women … I think those are major changes that are really going to cause a major whirlwind of girls and women shifting more of their efforts and talents into the football space.”

History is strewn with lost potential because of rules and limitations put in place by an intolerant society, and in the realm of football, Smith is determined to make sure no one is stunted by this again.