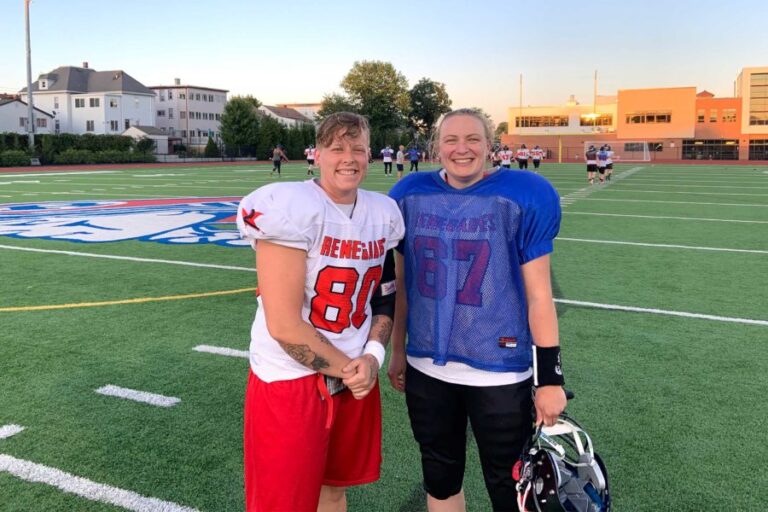 JULY 11, 2019 – Ashley Beckham and Kristen Sarson know how to tackle a challenge, and, experience shows, usually overcome it.

On July 13, the two Massachusetts women head to Golden, Colorado, to take on their next one. As teammates on Boston’s women’s full-contact football team the Renegades, Beckham and Sarson will battle for victory over the Cali War in the Women’s Football Alliance (WFA) National Championship.

This year’s match is a repeat of last year’s championship duel, where the Renegades came out on top 42-18. This season, Boston already has a 9-0 record.

The Renegades have been up and running since 2015, following a lineage of local teams dating back to 2000. They’re part of the WFA, and none of its players are full-time athletes. Beckham balances football with her job as a technical business systems analyst. Sarson is an environmental scientist with The Vertex Companies in Boston.

Both Beckham, a 2019 First Team All-American, and Sarson love the camaraderie that comes with playing on a team, as well as the opportunity to be able to refocus.

“I joined the team during a time where I felt very alone,” says Beckham. “This team welcomed me with open arms. These ladies are my family, and I would do anything for them.”

Sarson agrees, “It’s an escape from everything that’s going on in my day-to-day life.”

And, of course, there’s the challenge right on the field.

“I love playing football because it’s a challenge, both mentally and physically,” says Sarson.

“Playing is invigorating, and being good at it is even better,” says Beckham. “Getting better and better at something is an amazing feeling [and gives you a] sense of accomplishment.”

As far as being two smart, strong women who play well at a “traditionally male” sport, Sarson sums it up quite succinctly.

In the days leading up to the 2019 championship game we caught up with these two athletes and asked them five questions about football, being a woman, and what it means to win — all around.

Exhale Lifestyle: What’s it like playing a sport that is traditionally male? Did you have a circle of people that supported you in your choice to pursue football, or did you really just push for it on your own?

Sarson:When it comes up in conversation that I play football (after the clarification that I am not talking about soccer or flag football) the majority of people are genuinely interested and think it’s pretty awesome. I have also always been lucky enough to have family and friends that support me, even if they secretly wished I played a sport with a little less contact.

Beckham: I have a family that has been supportive from the get-go, but they don’t live very close by, so it was something I had to venture on my own. Luckily, I joined a team full of women in very similar positions, as well as women in very different ones. It brings a level of perspective to everything.

Sarson: The tough part about playing a traditionally male sport is the lack of recognition from the larger companies: shoulder pads that don’t quite fit right, an absence of retailers selling helmets outside of high school football season, and the struggle to maintain teams due to financial restraint, to name a few. The more the larger companies support women’s football, the more exposure the sport will get, and the easier it will be to grow the sport to its full potential.

Exhale Lifestyle: With TBI a more recent concern for NFL players, is this also a concern for you? Are there any other health concerns female players have to worry about that men perhaps do not?

Sarson: Concussions and head trauma have always been a concern for me, as well as for the team. While we have a concussion protocol in place, and coaches enforce safe tackling techniques, the majority of people who start playing in our league have never played football before. Tackling correctly takes time to learn, and if a rookie is going against a player who has been in the league for many years, it can get very dangerous. We are lucky enough to have a team trainer and a coaching staff that looks out for the well being of all our players, but it is always something that is in the back of our minds.

While I would not deem this as even close to a health concern, one unique thing for women playing football (or most sports) is that they do have to take time off if they’re trying to start a family. But, you better believe, as soon as the doctor gives them the ok, they’re back on that field kicking butt.

Exhale Lifestyle: Do you feel that women should be allowed to play in the NFL? If so, what would your parameters be?

Sarson: If an athlete is skilled enough to compete, then no matter what gender, I believe they should be allowed to play in the NFL. I don’t believe any specific parameters should be needed.

Beckham: I don’t think women should play on the same field. I think there should be further development to ensure women have a space to play, competitively, on their own space. But, until women have that space, they should be allowed to participate wherever there is football available to them.

Sarson: Female athletes aren’t looking for special treatment, they’re just looking to be recognized and given opportunities to be athletes.

Exhale Lifestyle: What does a victory on July 13 mean to you personally and, more generally, to women in sports?

Sarson: A victory would be the recognition of all the hard work the Renegades have put in over the past eight months. All the late-night practices, film review during lunch breaks, and time away from family and friends would be worth it.

Beckham: This would be a repeat championship for me, and to me, that’s a statement. The first championship wasn’t enough, and now my team and I are back for another. Winning this game would prove that we are the dynasty we claim to be. We’re here to leave a mark, and anything less than a victory is unacceptable.

Sarson: Our team is full of inspiring leaders who are helping empower young women. We have mothers, teachers, coaches, social workers … you name it! A win will bring inspiration to all those who look up to our players and show them that with hard work, you can accomplish anything.

Beckham: This win would signify how important it is to take your destiny in your own hands, and to not let anyone take that from you.

Exhale Lifestyle: If you could give a piece of advice to today’s young girls trying to find where they fit in, what would you say?

Beckham: Make sure you find something that fits you, and never, never change yourself for anyone or anything else.

Sarson: Do what you love, work hard and believe in yourself.

The WFA National Championship game will be broadcast on July 13 at 8 p.m. on ESPN3.